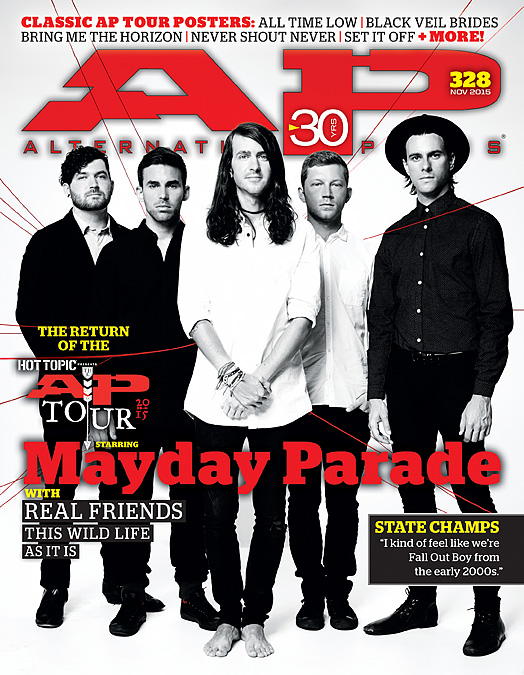 The Return Of The AP Tour with Mayday Parade, Real Friends, This Wild Life and As It Is; State Champs take charge; Against The Current go with the flow.

MAYDAY PARADE
Written by Jesse Richman
“Solid” was always a word that could describe Mayday Parade’s discography. But for a group approaching their 10-year anniversary that survived major-label upheaval, “solid” could sometimes feel like “predictable.” So, they threw it all out and started over—with new conceptual artwork, a heavier sound and an experimental recording process. As they embark on the 2015 AP Tour, Mayday Parade are ready for reinvention.

REAL FRIENDS
Written by Maria Sherman
Real Friends’ secret to success might seem a little counterintuitive, but the Chicago pop-punks try to stress less and keep it copacetic. It’s a worry-free formula that’s served them well, and made living in the moment that much sweeter.

THIS WILD LIFE
Written by Evan Lucy
Familiar with being the odd ones out, This Wild Life are determined to win over skeptics—and never set foot at a coffee shop open-mic night.

AS IT IS
Written by Annie Zaleski
The rookies of the AP Tour are ready to take on America—again. After their first stint on Warped and a grueling recording process, As It Is are about to show what they’ve learned.

AGAINST THE CURRENT
Written by Dana Getz
You first saw them on YouTube, but Against The Current have been invading all forms of media (including this very magazine) for a while. Now, the pop-rock powerhouse trio are preparing to forge an identity entirely their own.

STATE CHAMPS
Written by Evan Lucy
When 5 Seconds Of Summer picked the Shot Boys to open their Australian tour, diehard fans were afraid the pop-punks would forget where they came from. Not a chance. On their new album, State Champs let art mimic life—if life featured enough anthemic earworms to fill stadiums.

TECH-NO PLACE LIKE HOME
Your bedroom is an extension of yourself—and haven’t you always been the most tech-savvy one on the block? In this decor special, we trick your room out with the latest gadgets, posters and audiovisual advancements. Stay clued and plugged in.

THE HISTORY OF THE AP TOUR
With 10 campaigns (and two Eastern treks) in the history books, we’re taking a moment to reflect on some of the AP Tour’s finer moments. Check out memorabilia, unpublished photos and stories from past acts, including ALL TIME LOW, BLACK VEIL BRIDES, D.R.U.G.S., THE MAINE and more.

REVIEWS AND APICKS OF THE MONTH
New releases from BRING ME THE HORIZON, COHEED AND CAMBRIA, STATE CHAMPS, FOXING, BEACH SLANG, NEW YEARS DAY and more.

10 ESSENTIAL
Dance On The Dark Side

AP FUN TIMES
They’re right in front of you.