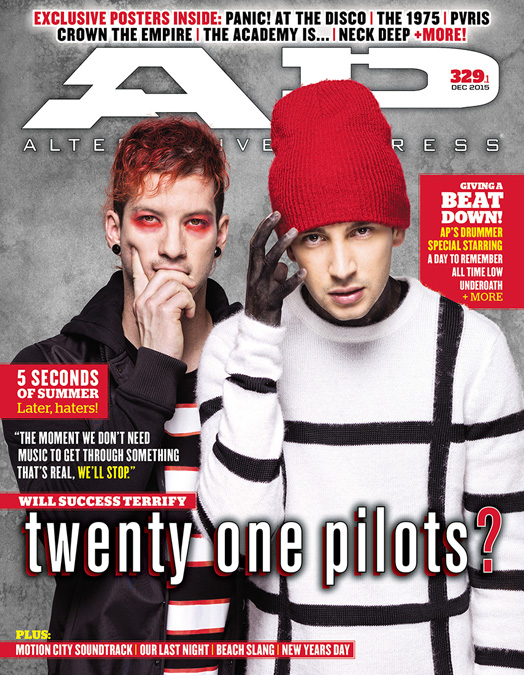 TWENTY ONE PILOTS
Written by Jason Pettigrew
It took years for Tyler Joseph and Josh Dun to make their mark on the world with their irresistible, neurotic pop. And now they’re making sure the world doesn’t mark them.

HOLIDAY GIFT GUIDE
We promise, it’s better than coal. From band merch to top-notch musician gear, this list of treats will help you brave the internet sales from Black Friday to Christmas Eve.

GIVING A BEAT DOWN: AP'S DRUMMER SPECIAL
We’ll give you the insider look on the gear and the grit of your favorite drummers, including PARAMORE, ALL TIME LOW, A DAY TO REMEMBER, BLACK VEIL BRIDES and more.

5 SECONDS OF SUMMER
Written by Maria Sherman
Team 5SOS have been hard at work this past year, touring constantly, captivating fans—and growing up. Regardless of a genre label, the boys feel right at home with their “new broken scene.”

OUR LAST NIGHT
Written by Dan Slessor
While these Warped warriors have taken pop-cover videos to a new level, it’s their fiercely DIY spirit that fuels their dreams.

MOTION CITY SOUNDTRACK
Written by Evan Lucy
The boys from Motion City’s nerves may never settle, but they’re still happy to take a leap into the deep end—metaphorically speaking.

AP: DIY
Stories and advice from SET IT OFF, THIS WILD LIFE, THE ACADEMY IS… and others.

LIFESTYLE
Blustery winds and endless snow got you feeling down? Check out some comics and comfy clothes made for curling up with some cocoa!

AP RECOMMENDS
COUNTERPARTS, BEACH SLANG, BETTER OFF and others.

REVIEWS AND APICKS OF THE MONTH
New releases from ESCAPE THE FATE, HANDGUNS, FEARLESS VAMPIRE KILLERS, LIKE MOTHS TO FLAMES and more.

CROSSED WORDS
How’s this coming across?