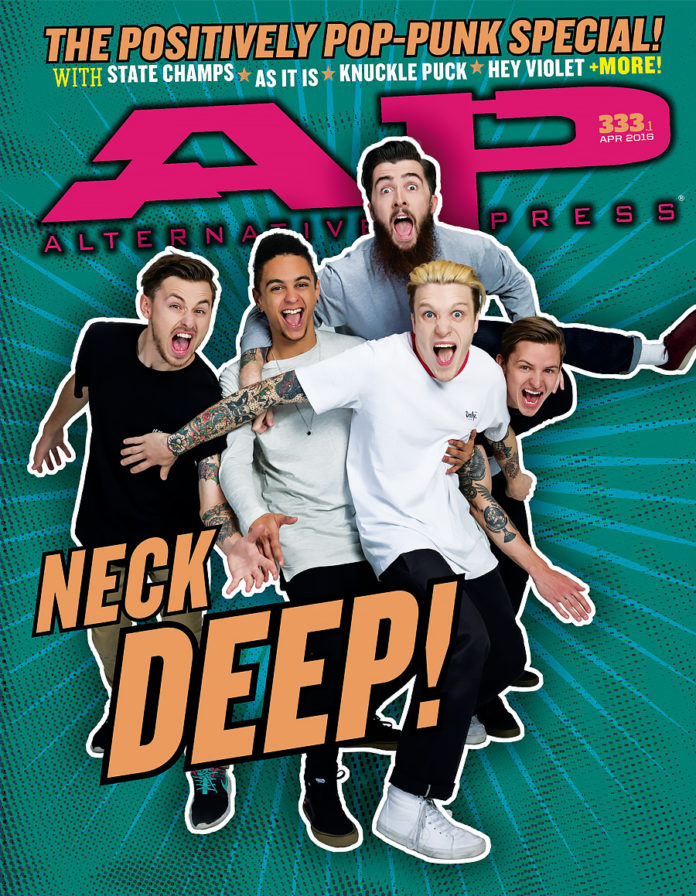 NECK DEEP
Through both the tumult and successes of 2015, Neck Deep never deviated from their mission: to make incredible music that inspires their legion of fans to do something. Turns out these great Britons really are here to prove Life’s Not Out To Get You.
Written by Andrew Kelham • Photos by Kane Hibberd

STATE CHAMPS
These New York rockers may have gone Around The World And Back this year, but how are they handling the jump from suburban clubs to sold-out headline gigs? The Champs talk their favorite music, biggest inspirations and how they created one of the best pop-punk albums of their generation.
Written by Maria Sherman • Photos by Kane Hibberd

WHAT'S MY SCENE AGAIN?
AP'S GUIDE TO THE NEXT GENERATION OF POP PUNK
We chatted with 12 of the most hardworking, on-the-grind pop-punk bands in the scene right now to deliver a primer of epic proportions—assisted by advice from THE WONDER YEARS, SUM 41 and much more! Super-producer JOHN FELDMANN posits on pop punk’s evolution and we introduce you to some of the people keeping the scene alive and rockin’.

AP POLL
Would you rather have a photograph or an autograph?

AP STYLE
How to rock the pop-punk look, plus Neck Deep and State Champs’ tour essentials.

THE PIT
This month, we’re slamming into REAL FRIENDS, GOOD CHARLOTTE and more…

AP D.I.Y.
Interviews and advice from the people behind NEW FOUND GLORY, CANDY HEARTS and others.

AP RECOMMENDS
SOMOS, LIGHT YEARS, LIKE PACIFIC and 12 other bands you might not have heard of (yet).

REVIEWS
The latest releases by THE WORD ALIVE, INTO IT. OVER IT. and more.

10 ESSENTIAL
Solid songs from pop-punk bands that broke up.