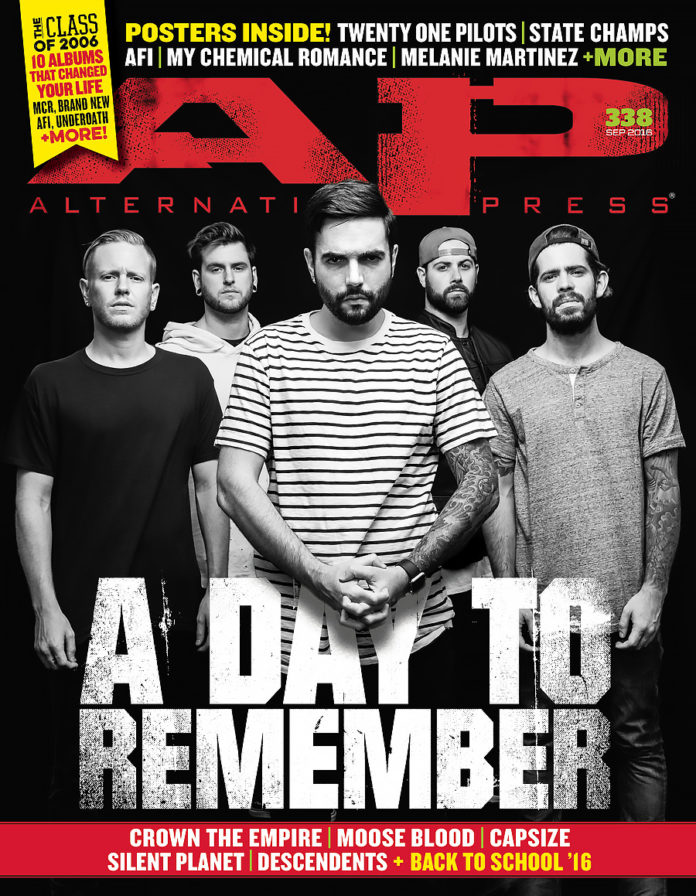 A Day To Remember get their fire back; revisiting the Class of ’06 with MCR, Brand New, Underoath, AFI and others; Crown The Empire return to real life; Moose Blood, Capsize and more!

A DAY TO REMEMBER
Written by Evan Lucy
The boys from Ocala, Florida, are playing the biggest stages of their career and just finished recording a life-affirming album. So why are they feeling Bad Vibrations?

CAPSIZE
Written by Dan Slessor
Capsize are on the cusp of releasing another intimate, technical post-hardcore album. But right now, they’re making sure their fans can start bands of their own.

CROWN THE EMPIRE
Written by Mischa Pearlman
Crown The Empire based their first two full-lengths upon a fictional world they had created. Now they’re shedding the fantasy and moving on to new things. What will they construct next?

MOOSE BLOOD
Written by Maria Sherman
For the last few years, these British emo upstarts have been traveling around the world playing heartfelt, solemn tunes. But while they were out following their dreams, they missed home like nothing else. Here’s how they channeled that into one of the best albums of the year.

THE CLASS OF 2006
Ten years ago, before skinny jeans became jeggings, flip phones got smart and zebra hair went ombre, these albums were setting the new standard for our scene. As we look back with BRAND NEW, MY CHEMICAL ROMANCE, AFI, UNDEROATH and more, we’re getting nostalgic in the best way possible.

AP POLL
Have you/would you meet your online friends at shows?

THE PIT
This month, we’re colliding with VANNA, FALL OUT BOY, MAX and more…

AP: DIY
Interviews and advice from the people behind HEAD WOUND CITY, THE COLOR MORALE and others.

AP RECOMMENDS
SILENT PLANET, MILESTONES, COLDFRONT and 12 of the newest, bestest bands around.

LIFESTYLE
You’re headed back to school (groan), but you’re going in style (yay)!

REVIEWS
The latest releases by DESCENDENTS, THE AMITY AFFLICTION and more.