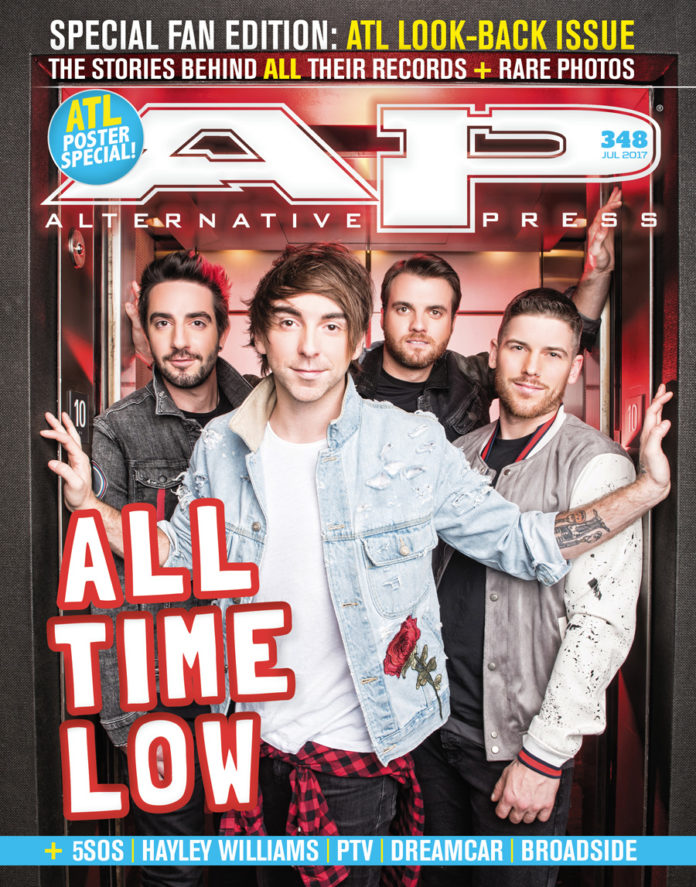 All Time Low look back and face forward, reflecting on their past releases and the music in their future; 5 Seconds Of Summer’s Calum Hood; Hayley Williams dyes for you; Davey Havok and No Doubt members get in their DREAMCAR and more!

ALL TIME LOW
Thirteen years and seven albums in, these wiseguys have carved their space in pop-punk history. That’s why we’ve dedicated this month’s cover to exploring their storied past, as well as what their ride to the next level will bring. From making the party scene to achieving young renegade status, everything you need to know about ATL lies inside.
Written by Evan Lucy

AP'S SUMMER SHOPPING GUIDE
This month, we're highlighting all the cool clothes and accessories to make your summer a lot cooler than usual.

DREAMCAR
AFI’s Davey Havok and members of No Doubt found a time machine, set the controls to the mid-’80s and teamed up to write an amazing new album. What’s not to love?
Written by Annie Zaleski

BROADSIDE
The Virginia pop-punk outfit packed up all their stuff and moved to the other side of the country to bet on their dreams. Let’s see what happens next…
Written by Maggie Dickman

AP: DIY
In this exclusive interview, 5 SECONDS OF SUMMER bassist Calum Hood discusses his love of the low end and what’s in store for his band’s next LP.

AP RECOMMENDS
NIGHT RIOTS, A WILL AWAY, CHASE YOUR WORDS and 12 more bands that will blow up the a/c in your car because they’re too hot…

AP STYLE
HAYLEY WILLIAMS and BRIAN O’CONNOR know full well that the goodDYEyoung. While you're at it, trick out your denim with a new selection of pins and patches.

REVIEWS
The latest releases by RISE AGAINST, ‘68, EIGHTEEN VISIONS and more.

10 ESSENTIAL
Meet us at the beach.