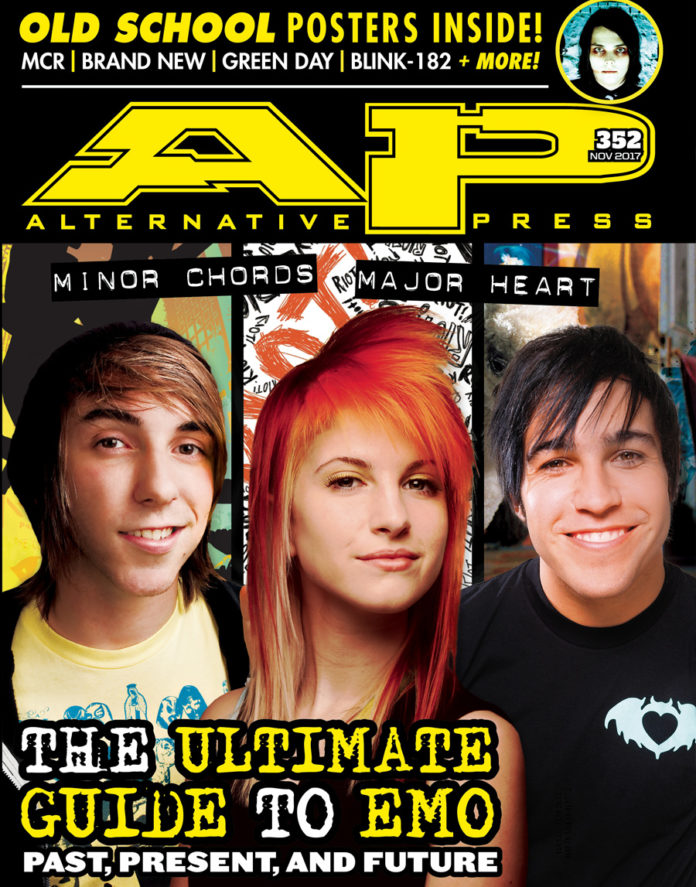 The Ultimate Guide To Emo

Our ULTIMATE GUIDE TO EMO looks way back and faces forward to summarize a misunderstood genre. Plus KNUCKLE PUCK conquer all, AUGUST BURNS RED evolve and 11 records that still stand tall, 10 years later.

THE EMO ISSUE
From artful progenitors to chiming twinkle-daddy guitarists to arena-fillers and back around again, emo means so much to so many. So whether you’re old enough to have been standing next to J. Robbins discussing authenticity during Revolution Summer, rummaging in dollar-bins for discs by the Van Pelt and Garden Variety or bidding on Pete Wentz’s used-up guyliner tubes on eBay, there’s something in this issue to reaffirm your taste, refer to your friends or re-stoke your fire for new sounds. Those who don’t know history are doomed to delete it…

THE QUIET THINGS THAT NO ONE EVER KNOWS
Many have actively tried to connect emo’s various roots, branches and virulent strains. Here, Jesse Richman draws a historical line in the sand, along with a compelling argument about emo as a subgenre that’s always in flux and in progress.
Written by Jesse Richman

A BRIEF HISTORY OF MINOR CHORDS AND CRYING
Here is a smattering of crucial bands who have defined the movement from its storied history, mainstream immersion and indie underground nestling, from fans, foes and critics alike. From post-harDCore mentors (Rites Of Spring) to Midwestern majors (Braid) to Jersey’s finest prancers (you know who), these are the outfits that took up the emo mantle—even if it was foisted upon them.

2007: THANKS FOR THE MEMORIES
The scene as we know it was pretty fertile in all directions, from pop-punk to metalcore, emo (of course) and straight-up punk. For this lookback, we parsed records by AGAINST ME!, ALL TIME LOW, CHIODOS, FALL OUT BOY, PARAMORE, SAY ANYTHING among many others to sum up a banner year for the scene.

KNUCKLE PUCK
The Chicago new-school punk outfit had more than their fair share of personal and artistic frustrations during the creation of their new album. But tell them they can’t do something, and watch them defy everyone and everything.
Written by Kika Chatterjee

AP RECOMMENDS
THE GOSPEL YOUTH, GRETA VAN FLEET, NO WARNING and 12 more bands that will make you fall to your knees, trembling at the glory of hearing…

You can purchase your copy of the Ultimate Guide To Emo issue right here: