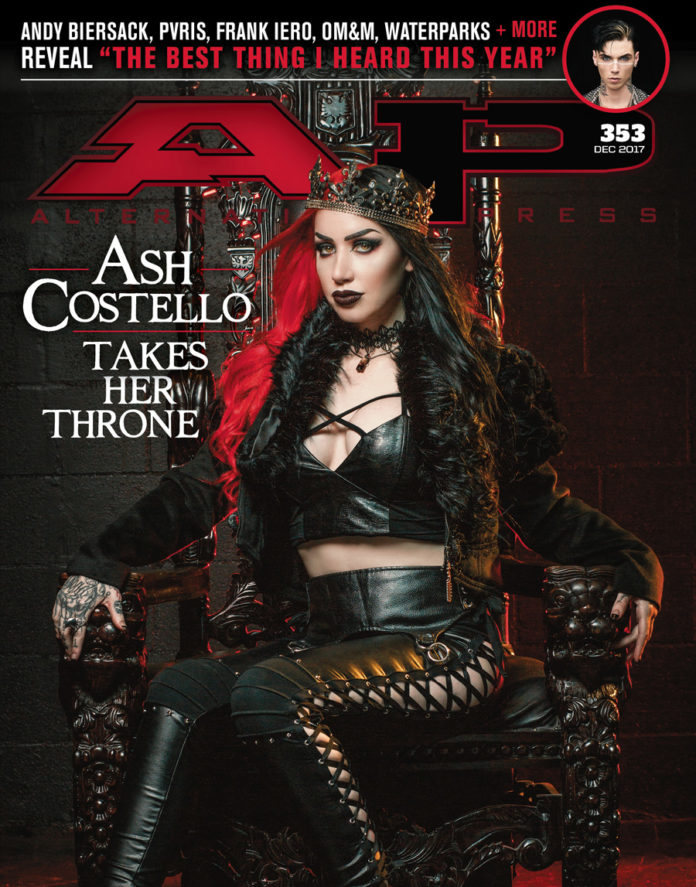 Ash Costello of New Years Day unleashes the fury; Julien Baker takes (and gives) care; the Front Bottoms get lost in time; the Used get reviewed and more!

ASH COSTELLO
Ash Costello always wanted a career in music, but many forces held her back
—including herself. It’s only after she chose to go from being a doormat to a one-woman demolition squad that New Years Day started seeing their fortunes change.
Written by Cassie Whitt

JULIEN BAKER
The Tennessee-based vocalist has received growing acclaim for her next-level confessional songwriting style. Which begs the question: What has she learned about herself in the process?
Written by Annie Zaleski

THE FRONT BOTTOMS
The Tennessee-based vocalist has received growing acclaim for her next-level confessional songwriting style. Which begs the question: What has she learned about herself in the process?
Written by Annie Zaleski

THE BEST THING I HEARD THIS YEAR
Critics? Who needs ’em? That’s why we asked members of BLACK VEIL BRIDES, CODE ORANGE, HALESTORM, FRANK IERO AND THE PATIENCE, OF MICE & MEN, PIERCE THE VEIL, PVRIS, SLEEPING WITH SIRENS and WATERPARKS about the one thing they kept going back to listen to this year.

ALTPETS
CREEPER keyboardist/vocalist Hannah Greenwood 's pets will bring you all the feels.

AP RECOMMENDS
PALE WAVES, PEARS, SHARPTOOTH and 12 other bands your friends will lie to you about hearing first.

AP STYLE
Shriek while you soak in our selection of boo-scary bath bombs. And in case you missed it in your feeds, the ’90s are bac

REVIEWS
Five opinions on The Canyon, the latest by THE USED.

10 ESSENTIAL
Songs from the ’90s that are cooler than your parents' old clothes.

You can purchase your copy of the Ash Costello issue right here: