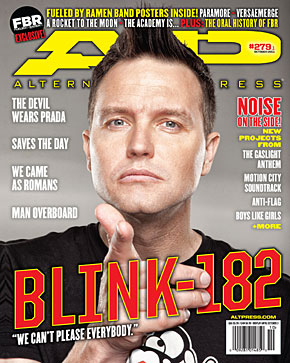 The combined forces of personal projects, television show tapings and hanging with drum buddies couldn’t stop the arrival of new music from these pop-punk legends. Scott Heisel gets the scoop on the record the scene’s been waiting for.

NOISE ON THE SIDE

Think you’re busy? Think again: The musicians in our annual side-project special are juggling a second band in addition to their main gig. We talked to THE HORRIBLE CROWES, WHITE WIVES, FAREWELL CONTINENTAL and more about their extracurricular musical activities.

With their new album, the acclaimed Christian metalcore outfit have raised the stakes musically, socially and spiritually. It’s time for the world to play catch up.

WE CAME AS ROMANS

These metalcore maniacs are grateful for the love they’re given on tour. But they’ve learned that waking up in your own bed is sometimes the greatest gift of all.

At age 31, STD founder Chris Conley is considered an elder statesman in the scene. But in the words of Indiana Jones, “It’s not the years—it’s the mileage.”

The New Jersey neo-pop-punk outfit are doing everything themselves until it hurts—and after that, they’ll keep on keepin’ on.

INCOMING
WIRETAPPING
OP-ED: ALL TIME LOW guitarist JACK BARAKAT
AP POLL
NEW RELEASES
AP:DIY
Featuring advice and inside information from THE READY SET, THURSDAY, EISLEY and more.
AP STYLE
With EVERY AVENUE
AP RECOMMENDS
INTO IT. OVER IT., SAINTHOOD REPS, THE STORY SO FAR and more.
REVIEWS
THE AP RECORD STORE is fully stocked for your back-to-school shopping with new music from THRICE, ANDREW JACKSON JIHAD, POLAR BEAR CLUB, NEVER SHOUT NEVER, CHUCK RAGAN, KEVIN DEVINE, SWITCHFOOT, MADINA LAKE, WILD FLAG, MATES OF STATE, SAMIAM, THE RAPTURE, CLAP YOUR HANDS SAY YEAH, BRIDGE AND TUNNEL, COBRA SKULLS and more.
10 ESSENTIAL ALBUMS NOT ON SPOTIFY
Sure, Spotify is the newest, coolest app to come along for the music industry since Nyan Cat!, but for all its vast catalog, we found a few classic records you can’t hear on there.