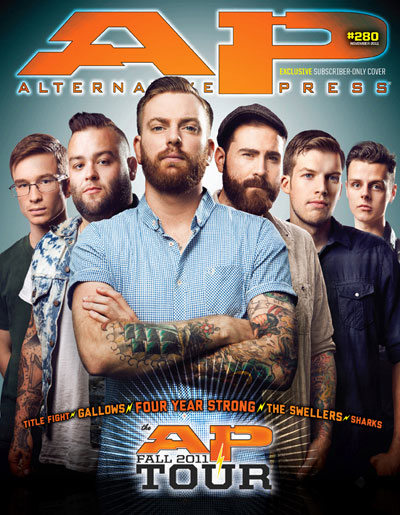 The world is bigger than popcore, and FYS want to find out just how far they can go.

The British hardcore unit switched lead singers and kept all of their trademark attitude intact.

The Pennsylvania delegation are reminding the world that punk rock without community isn’t worth your time.

These Michigan pop-punks realize that when you kill time, you murder success.

These earnest U.K. punks earned their stripes opening for some of America’s most beloved bands. Now they’re gonna pry open your heart.

In a few short years, Andrew McMahon dumped an album’s worth of songs and a whole lot of questions about what it means to be in love. He gets it out into the great, wide open with AP.

Sonny Moore ditched his band, found his calling, lost his laptops and ascended to the throne of the electronic dance scene. And he’s just as shocked as you are.

Fans such as Patrick Stump, Bayside and I Am The Avalanche are making sure this Boston post-emo act lose their status as America’s best-kept secret.

INCOMING
WIRETAPPING
OP-ED: KOJI
AP POLL
NEW RELEASES
AP:DIY
Featuring advice and inside information from THE DEAR HUNTER, COBRA STARSHIP, FAMILY FORCE 5 and more.
AP STYLE
With UME
AP RECOMMENDS
THIS TIME NEXT YEAR, SLEEPER AGENT, RESTORATIONS and more.
REVIEWS
THE AP RECORD STORE is prepped for October’s onslaught of new music, with records from NEW FOUND GLORY, MUTEMATH, I AM THE AVALANCHE, LA DISPUTE, YOU ME AT SIX, LIGHTS, ALESANA, MAYDAY PARADE, TOM WAITS, WE ARE THE IN CROWD, LOOK MEXICO, WEATHERBOX, RELIENT K, DEAD TO ME, TRAPPED UNDER ICE and more.
10 ESSENTIAL QUESTIONINGS OF FAITH
Just as you shouldn’t be persecuted for what you believe in, we also believe you shouldn’t be persecuted for what you don’t believe in—and these 10 artists probably agree.