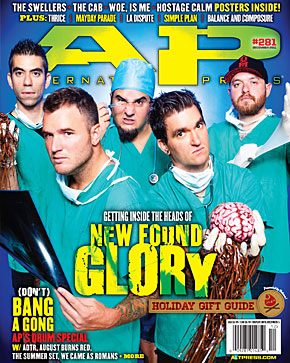 NEW FOUND GLORY
Nobody ever thought a bunch of dudes from Florida would become a pop-punk institution. But Team NFG realized early on that with extreme amounts of dedication—to their craft, their fans and especially themselves—anything is possible.

(DON’T) BANG A GONG: AP’S DRUM SPECIAL
In celebration of National Drum Month, we pin down some of the scene’s best and brightest bashers—including members of A DAY TO REMEMBER, AUGUST BURNS RED, THE SUMMER SET, WE CAME AS ROMANS and more—for tips, tricks and gear breakdowns.

THRICE
They’ve released the best album of their career, but Thrice are looking for more than merely being the post-hardcore Radiohead.

LA DISPUTE
The next generation of post-hardcore is all about sharing stories and winning hearts.

MAYDAY PARADE
Their route took a turn when the music business tried to fix what wasn’t broken, but the pop princes are back on track.

BALANCE AND COMPOSURE
The secret behind this Eastern Pennsylvania band’s rise? Question everything.

WE ARE THE IN CROWD
In a scene where bands get torn down for doing well, these guys—and gal—are too busy enjoying themselves to care.

SIMPLE PLAN
The Canadian delegation have learned that the phrase “nothing gold can stay” doesn’t always apply to pop-punk.

AP:DIY
Featuring advice and inside information from AS I LAY DYING, MAKE DO AND MEND, EVERY AVENUE and more.

AP RECOMMENDS
THE JOY FORMIDABLE, LARRY AND HIS FLASK, STATES and more.

10 ESSENTIAL ALBUMS BY BANDS THAT BROKE UP IN 2011
Although these bands have come to the end of their respective roads, still we can't let go.