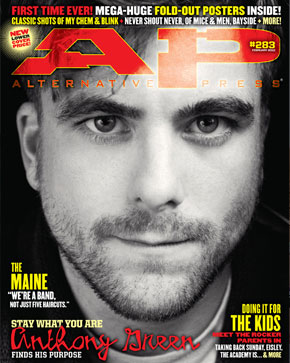 Prior to the release of his second solo album, the Circa Survive frontman throws down some real talk about where he’s been and where he wants to be.

ANTHONY GREEN
Prior to the release of his second solo album, the Circa Survive frontman throws down some real talk about where he’s been and where he wants to be.

SPECIAL >>>
DOING IT FOR THE KIDS: PARENTS WHO ROCK
Anthony Green might agree that being in a band is an excuse to stay frozen in arrested development. But what happens when having a child of your own enters the picture? AP learns how WILLIAM BECKETT and members of TAKING BACK SUNDAY, THRICE, EISLEY and AIDEN balance having kids and playing gigs.

FEATURES >>>
THE MAINE
The Arizona rock delegation want to be known for their music, not their scene hair. And when some people had a problem with that, the band took control of their destiny.

AP:DIY
Featuring advice and inside information from TAKING BACK SUNDAY, DESTROY REBUILD UNTIL GOD SHOWS and more.

THE AP CATALOG
Get tips about the hottest tees, hoodies, gear, games, gadgets and much more!

10 ESSENTIAL SONGS TO MAKE SHOVELING SNOW BEARABLE
Sick of clearing out your driveway at the crack of dawn? Let AP’s playlist make this chore not so much of a pain.