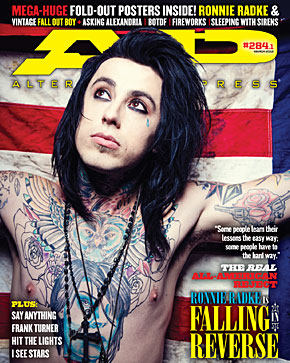 Ronnie Radke’s post-Escape The Fate vehicle is having its fair share of acceleration, lineup casualties and head-on collisions. Either way, he’s having the ride—and time—of his life.

FALLING IN REVERSE
Ronnie Radke’s post-Escape The Fate vehicle is having its fair share of acceleration, lineup casualties and head-on collisions. Either way, he’s having the ride—and time—of his life.

HIT THE LIGHTS
The coolest band from Lima, Ohio, escaped major-label idiocy to make the record they wanted to make.

I SEE STARS
The Midwest electro-screamo delegation switched around some patch cords and dialed down the shredding to start a whole new chapter.

FRANK TURNER
The British troubadour is cooler than you, us and everyone we know. But he’s too busy to worry about such things.

SAY ANYTHING
Max Bemis has found peace and inspiration in raging chaos and anarchy. What have you done lately?

AP:DIY
Featuring advice and inside information from RELIENT K, THE WONDER YEARS, THE DEVIL WEARS PRADA and more.

THE AP CATALOG
Get hip to the latest tees, hoodies, shoes, jewelry, gear, games and much more!

AP RECOMMENDS
THE MENZINGERS, PORTER ROBINSON, I HATE OUR FREEDOM and more.

REVIEWS
Swing by the AP Record Store to get stocked up with new albums from FUN., CURSIVE, CLASSICS OF LOVE, SILVERSTEIN, CHIDDY BANG, CHEAP GIRLS, OF MONTREAL, BEN KWELLER, THE SADDEST LANDSCAPE, AIR, NO TRIGGER, TONIGHT ALIVE, PERSON L, BENEATH THE MASSACRE and more.

10 ESSENTIAL SONGS CHARACTERS YOU DON’T WANT TO DATE
To mark Valentine’s Day, AP suggests you stay away from the losers, dweebs, cowards and all-around unsuitable romantic foils found in these tunes.