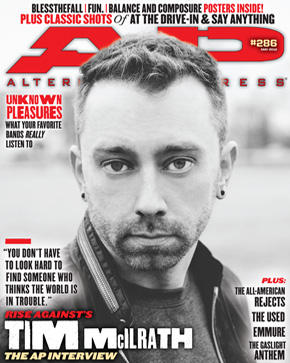 Rise Against’s respected frontman takes stock of punk, the state of activism in America and the things going on during this U.S. election year. You think you know, but you don’t.

TIM McILRATH
Rise Against’s respected frontman takes stock of punk, the state of activism in America and the things going on during this U.S. election year. You think you know, but you don’t.

SPECIAL >>>
UNKNOWN PLEASURES
A wise person once said, “There are no guilty pleasures—only unknown ones.” In other words, although some bands wear their collective influences on their sleeve, others have some unexpected inspirations. From hardened metalheads who dig hip-pop to pop aficionados who prefer their parents’ party tunes, this special reveals the secret jams of your favorite musicians.

THE ALL-AMERICAN REJECTS
Tyson Ritter promises you his “lost weekend” is officially over, AAR have recorded their best record yet and there’s nothing “punk” about his band. And he’s okay with that if you don’t believe him.

THE USED
The Used have been rockin’ for close to a decade, but frontman Bert McCracken is rediscovering how to make himself vulnerable. (When he’s not cooking—food, that is…)

AP:DIY
Featuring advice and inside information from SAINTHOOD REPS, A LOSS FOR WORDS, SLEEPER AGENT and more.

THE AP CATALOG
Survive April showers with the latest rain gear, plus the coolest cameras, band merch, video games and much more!

10 ESSENTIAL ORIGINAL-ECLIPSING COVERS
Have you ever heard a cover song that was so good, it made you forget about the original? We have, too—and here are 10 of our favorites. (And no, Limp Bizkit’s “Faith” didn’t make the list.)