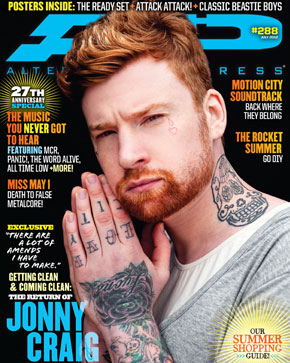 Jonny Craig comes clean in this worldwide exclusive interview, plus Miss May I, Motion City Soundtrack, our Unheard Music special including My Chemical Romance, Panic! At The Disco, All Time Low and more!

JONNY CRAIG
The Dance Gavin Dance frontman’s chemical consumption was as notorious as his vocal prowess and onstage charisma. In this exclusive interview, he comes clean about his bad habits and the exploitation of his fans—and reveals how he’s making up for lost time.

2012 AP SUMMER SHOPPING GUIDE
Now that summer’s in full swing, your wardrobe (and music collection) could use a little freshening up, right? Enter AP’s Summer Shopping Guide, a compendium of the newest tees, tanks, tunes and more. From rad vinyl to righteous hoodies, we have you covered in the cool department—literally.

THE UNHEARD MUSIC
Alternative Press celebrates its 27th anniversary with a special revealing the stories behind records that were never released, bands which never transpired and collaborations that remain locked in the vaults. We try to get to the bottom of the hidden exploits of MY CHEMICAL ROMANCE, GREEN DAY, ALL TIME LOW, PANIC! AT THE DISCO, DASHBOARD CONFESSIONAL, THE WORD ALIVE, THRICE and many more.

FEATURES:
MOTION CITY SOUNDTRACK
The future no longer freaks them out, but that’s only because MCS are making the best music of their career, 10 years after they started.

MISS MAY I
The Dayton, Ohio, contingent are throwing away the “-core” and focusing on bringing all the metal they possibly can.

AP:DIY
Featuring advice and inside information from ENTER SHIKARI, THE SWELLERS, FAKE PROBLEMS and more.

THE AP CATALOG
Get stoked for summer with fun trinkets, band merch, video games, apps and much more!

REVIEWS
It might be hot outside, but the AP Record Store has central air, so come on in and pick up new releases from THE ROCKET SUMMER, MAKE DO AND MEND, THE BOUNCING SOULS, THE HIVES, WHITECHAPEL, METRIC, VAMPIRES EVERYWHERE!, GOJIRA, MIXTAPES, LIT, THE TALLEST MAN ON EARTH, ARCHITECTS (UK), FOR ALL THOSE SLEEPING, THE TEMPER TRAP and more.

10 ESSENTIAL NAMECHECKED MUSES
Helen Of Troy’s face may have launched a thousand ships, but she never inspired a song. Here are 10 women responsible for making bands put pen to paper.