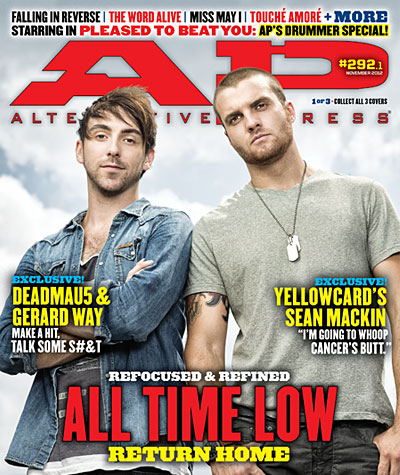 All Time Low bid farewell to the major-label system and get back to business. deadmau5 & Gerard Way get in the ring w/our editor in chief. Yellowcard’s Sean Mackin talks about his diagnosis. Plus Hostage Calm, VersaEmerge, our drummer’s special & more!

ALL TIME LOW
AP’s favorite potty-mouthed pop-punks had a less than stellar experience during their dalliance with the major-label system. But where lesser bands would’ve panicked or broken up, ATL stepped up their game, completely rejuvenated and wielding a renewed outlook toward their craft and their place in the scene. The only things missing? Maybe a couple of dick jokes…

Special >>>
PLEASED TO BEAT YOU: AP’S DRUMMER SPECIAL
What do the drummers of FALLING IN REVERSE, THE WORD ALIVE, MISS MAY I and THE GHOST INSIDE have in common? They—along with five more people—are our favorite bashers of 2012. See if your favorite stickman (or woman) made the cut!

Features >>>
DEADMAU5 vs GERARD WAY
Following the success of their “Professional Griefers” collaboration, the fearless wiseguy of the electronic dance music realm and the My Chemical Romance frontman crack wise, tell stories and drop dimes on their respective scenes.

SEAN MACKIN
In this exclusive interview, the Yellowcard violinist talks openly about living with the thyroid cancer he was diagnosed with late last year, dealing with it on tour and finding hope in family, friends and music.

BETWEEN THE BURIED AND ME
Imagine a mosh pit started by Neil Armstrong, Carl Sagan, Isaac Asimov and Ray Bradbury. Now guess who they’d be listening to.

HOSTAGE CALM
This Connecticut hardcore band write songs from the heart, not from the wallet.

VERSAEMERGE
The electronic-tinged pop-rockers may have slimmed down to a duo, but their intentions remain as huge as ever.

THE AP CATALOG
Dear politicians: Socialism will never catch on in America because, well, people like to own stuff.

10 ESSENTIAL SIDE ONE, TRACK ONES
Sure, maybe this idea was inspired by Rob Gordon in High Fidelity, but our list has virtually nothing in common with his. Besides, he's fictional, which makes our opinion matter way more.