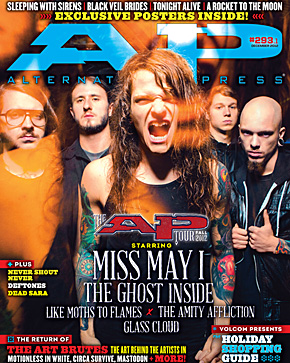 The Ghost Inside
Miss May I

Get the scoop on this year’s AP Tour bands, including Miss May I, the Ghost Inside and Like Moths To Flames, along with our Art Brutes special looking at the creative minds in Motionless In White, Circa Survive, Mastodon + more!

MISS MAY I
Tell your friends, your younger brothers and sisters, your parents and that one goofy uncle who swears Ozzy Osbourne is a genius: Everyone is invited to the party these metal-laden Ohioans are throwing.

Specials >>>
VOLCOM PRESENTS: 2012 AP HOLIDAY SHOPPING GUIDE
Looking for the best gifts to give (and receive) this year? Look no further than our holiday gift guide, featuring the best clothes, band merch and tech toys of the season.

THE RETURN OF THE ART BRUTES
The third installment in our sporadic series on “rockers who art,” features members of MOTIONLESS IN WHITE, CIRCA SURVIVE and DANCE GAVIN DANCE among others who are pushing artistic envelopes the way their music flexes stereo speakers.

THE GHOST INSIDE
For decades, the hardcore ethos has been immersed in the dogma of scene unity and thinking for yourself.  The Ghost Inside create music and lyrics you that resonate long after the show is over.

LIKE MOTHS TO FLAMES
Chris Roetter is an affable guy, who will engage in any kind of conversation you want. Just remember to talk to him,
not at him.

THE AMITY AFFLICTION
Joel Birch worked through the troubles in his life by getting the anguish out in his lyrics. Not surprisingly, his fans are paying it forward.

GLASS CLOUD
Nobody joins a band to be miserable (unless you’re in the Ramones). Which is why before they wrote a single song, the members of Glass Cloud came together as friends, first.

AP:DIY
Tips and tricks from members of THE GASLIGHT ANTHEM, THE CHARIOT, MASKED INTRUDER and more.

THE AP CATALOG
Because, hey, who doesn’t like, you know, stuff?

REVIEWS
This month, the AP Record Store gives thanks for new releases from NEVER SHOUT NEVER, DEFTONES, PEACE’D OUT, ALL THAT REMAINS, MOTIONLESS IN WHITE, WOE, IS ME, THE ACACIA STRAIN, MOTION CITY SOUNDTRACK, CHRIS WOLLARD & THE SHIP THIEVES, BAD BRAINS, HOW TO DESTROY ANGELS, THE CASKET LOTTERY, THE EVENS, PUNK GOES POP and more.