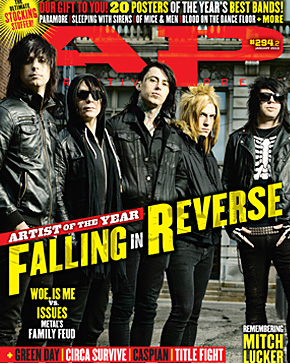 AP ends the year with a bang, including a massive photo special of your favorite bands as well as an exclusive interview with Ronnie Radke, singer of AP’s artist of the year Falling In Reverse!

FALLING IN REVERSE
Ronnie Radke’s hair-metalcore outfit have galvanized legions of adoring fans and committed haters—which means everybody is talking and no one’s ignoring them. Radke sat down with AP to discuss his accomplishments, current legal travails and what the future holds for him. (What does a “murdered-out stroller” look like, anyway?)

Specials!
ROAD WARRIORS
Musicians and Harley-Davidson motorcycles have been a perfect pair since the King of Rock ’n’ Roll (that’s Elvis for you kiddos) rolled out on one. Here are five musicians keeping the spirit of the storied brand alive.

THE AP PHOTO OP SPECTACULAR
Consider it our gift to you: More than 20 photos of 2012’s best bands, suitable for hanging on the wall or customizing the dartboard in your basement.

Feature
WOE, IS ME vs. ISSUES
Though they once shared a creative vision, stress fractures forced the members of Atlanta metal outfit Woe, Is Me apart, with Issues rising from the ashes. We check in with both bands to let them clear the air—or throw more beef on the fire.

AP:DIY
Tips, tricks and inside advice from CIRCA SURVIVE, TITLE FIGHT, TEENAGE BOTTLEROCKET and more.

THE AP CATALOG
Because, hey, who doesn’t like, you know, stuff?

AP RECOMMENDS
CASPIAN, METZ, WE ARE THE PHYSICS and more.

REVIEWS
The AP Record Store is ending the year with a bang, featuring new titles from GREEN DAY, BOYS LIKE GIRLS, MATT & TOBY and more, as well as a comprehensive recap of the year in reviews.

10 ESSENTIAL ALBUMS OF 2012
Approximately 18 billion albums came out this year (give or take 17.9999 billion). These are the AP editorial staff’s 10 favorites.