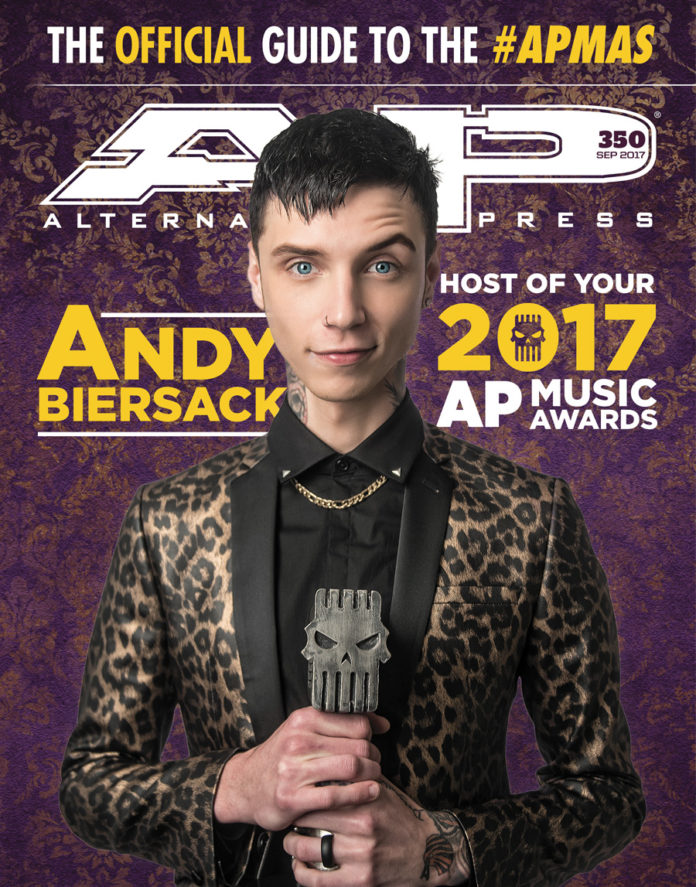 It’s the fourth annual APMAs with your host ANDY BIERSACK! Plus Icon recipient LAURA JANE GRACE of AGAINST ME!, Vanguard band KORN, boss Influencer JOHN FELDMANN and stories and moments from all of this year’s nominees!

THE 2017 ALTERNATIVE PRESS MUSIC AWARDS
Comedy best described as “no-he-didn't,” progressive-thought icons, awesome creative teamings and full-on rock action. You must be at the fourth annual APMAs, where we’ve got all that and a big-ass bag of non-GMO chips. Behold your guide to the night’s sights and sounds…

BEST VOCALISTS
The front-folks of EVERY TIME I DIE, THE MAINE, NECK DEEP, PVRIS, SET IT OFF and STATE CHAMPS share stories about their craft, from the unknowing to… wait, Mother Goose on steroids?

BEST NEW ARTIST VIDEO
presented bY JOURNEYS
This new award celebrates artists whose clip game is just as tight as their tracks.

YOUR HOST: ANDY BIERSACK
The Black Veil Brides frontman and Andy Black alter ego takes center stage at this year’s event for maximum hilarity and quite awesome cheekbones. Is there anything this guy can’t do? We thought not, and that’s why he’s here with us tonight.

ICON: LAURA JANE GRACE
The frontwoman for rough ’n’ tumble ’n’ righteous rockers Against Me! gave a voice and a profile to transgender politics and culture to a generation that demanded it. Grace’s stories of heart and heartbreak have resonated with listeners of all types, the mark of a true icon.

SONG OF THE YEAR POSTERS
presented bY EPITAPH RECORDS

VANGUARD: KORN
The nü-metal trailblazers’ manic hybrid of hip-hop attitude and tungsten-metal grooves has influenced generations of bands from multiple genres. Two decades in, Korn steadfastly refuse to slow down. Why the hell should they?

ALBUM OF THE YEAR
presented bY JOURNEYS

ARTIST OF THE YEAR

BACK-TO-SCHOOL SHOPPING GUIDE
Summer goes entirely too fast, but we’ve got the goods that will make you slow your roll significantly.