Watch a video from the vigil of Lucker's fans and friends paying tribute to him via BandsOnTour TV.

We have exclusive updates from last night's vigil along with a photo gallery.

The Los Angeles Times has reported from authorities that "Lucker struck a light pole near the intersection of Main and 13th streets [in Huntington Beach, CA] and was thrown from his 2013 Harley Davidson."

The band has announced that there will be an open candlelight vigil at 8 p.m. tonight in Huntington Beach, CA. Read the tweet below:

About a month ago, I spoke with Mitch Lucker for an article I was writing for the January issue of AP. The story was about musicians who ride Harley-Davidsons--sort of a “My Favorite Gear” column, but with motorcycles. It was no secret in this music scene that Lucker was an avid motorcycle rider, and he was more than willing to speak with me about his second-favorite hobby. He was just an all-around nice guy--one of those rare interview subjects who makes my job so easy, like I'm just chatting with a friend. I was also struck by his passion, for music, motorcycles and his home state of California. Below is a bit of my interview with Lucker. As Nuclear Blast Records said in their official statement regarding Lucker's death: “He left us doing what he loved to do most.” RIP Mitch. You will be missed. -Brittany Moseley, Associate Editor of AP

When I was growing up, we lived by the hills in Riverside [California], so if you had a dirt bike, you were the cool kid. If it had a motor and two wheels, it was badass.

What attracts you to motorcycles?

The danger in it. Being a frontman in a band, you get addicted to adrenaline rushes. When you’re onstage, there’s not more of a rush. When I get home from touring, I need to find something to match that so I don’t get my adrenaline withdrawals. Being exposed to every element [...] while you’re sitting on a motor—that to me is freedom.

Is there a sense of camaraderie among motorcycle riders?

Even if you’re just riding on the highway by yourself and someone passes you on a bike going the opposite direction, there’s like a “Hey, what’s up?” type of thing that you do no matter who you are. People in cars don’t do that. But motorcycle-to-motorcycle, it’s just a common respect kind of thing. It’s kind of a family unit.

Lucker appeared in the Warped Tour documentary film, “No Room For Rockstars” earlier this year. Check out a clip below in which he describes how performance rids him of his anxiety.

"The only time I feel normal, and not stressed out and not freaked out, is when I’m onstage," Lucker said.

Later in the clip, Lucker’s mother goes on to say, “You know, it’s like two personalities. When Mitchell gets onstage, he just becomes this magnificent beast.”

It is with great sadness and regret this morning that we have to report that Mitch Lucker, vocalist of SUICIDE SILENCE, passed away a few hours ago due to injuries sustained during a motorcycle accident.

NUCLEAR BLAST would like to offer our condolences to his family, friends, band members and fans worldwide who are affected by this loss.

He left us doing what he loved to do most. He was 28 years old and will be sorely missed.

Fans are encouraged to share their memories, photos of Mitch and condolences on the band’s official Facebook page: www.facebook.com/SuicideSilence.

Mitch Lucker, lead singer of heavy metal band Suicide Silence, died early this morning after being in a motorcycle accident Wednesday night. He was 28. AP confirmed the news with Charles Elliott of Nuclear Blast Records, the label Suicide Silence are signed to.

According to an article fron The Press-Enterprise, Lucker was pronounced dead at 6:17 a.m. PT this morning at UCI Medical Center in Orange County, California. Lucker was hospitalized after a motorcycle accident shortly before 9 p.m. PT Wednesday. Huntington Beach police are investigating the crash. 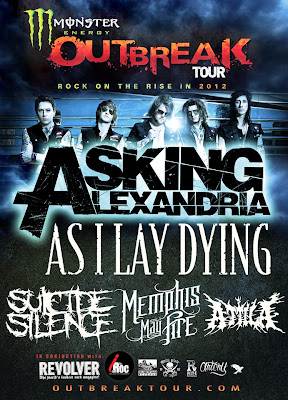 Suicide Silence are part of the Monster Energy Outbreak tour, along with Asking Alexandria, As I Lay Dying, Memphis May Fire and Attila, which is scheduled to kick off November 16. No word yet on how or if this will affect the tour.

Just four days ago, Lucker posted the photo to the right on his Instagram of him riding his motorcycle down the highway. The caption read: "Caught smashin on the 55 fwy last night by @00rjroyer00 good times."

AP will have more details as this story develops.

AP offers our many condolences to Lucker's family, friends and fans.