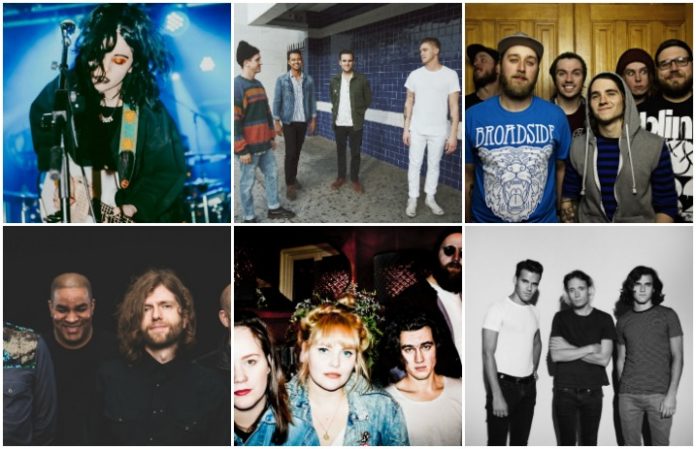 Pale Waves are the newest addition to Dirty Hit’s roster, joining the likes of the 1975 and the Japanese House. The quartet made their debut this week with the jam “There’s A Honey,” which was produced by Matty Healy and George Daniel of the 1975, and it’s everything indie pop music needs. Right now.

“Deja Vu” is a taste of Romes’ upcoming self-titled album. Hailed as one of our 17 artists to watch in 2017, Romes are a Toronto-based indie-rock, pop-infused act, and they’re new track is everything you need to be spinning this weekend.

Rival Town are a pop punk band from Ontario Canada and were one of AP’s past “12 bands you need to know” in the print issue. “See Through” dropped on Friday, and it’s the first single from their forthcoming EP.

For fans of Stick To Your Guns, French band Resolve are made up of members from Above The North, who split last year. Resolve released their debut single, “Exposed,” and it’s a powerful, metalcore number. The accompanying video deals with the concept of nightmares.

Molehill are a progressive indie rock band from Chicago, and the first single from their forthcoming EP—due out May 12—is an upbeat track. However, it was inspired by a more complex topic: the “Euromaidan” protests in the Ukraine, which saw people rising about against a regime.

Whitty grunge-pop isn’t the combination of adjectives you necessarily see everyday, but that’s exactly what Canadian band Mise en Scene play. Their new single, “Show Me You’re Real,” is catchy-as-hell, everything you need play with the windows down this afternoon. Catch Mise en Scene at SXSW.

The Bigger Empty – “Take My Heart With You”

The Bigger Empty features the talents of former Alkaline Trio drummer (From Here To Infirmary) Mike Felumlee. Lakes & Oceans Vol 1 : Michigan, their first of four EPs to be released this year, has the new track, “Take My Heart With You,” which pairs loud guitars with shameless hooks.

The Tossers – “Smash The Windows”

St. Patrick’s Day is right around the corner, and Celtic punk group the Tossers have premiered a new single, “Smash The Windows,” to start celebrating way in advance. Their forthcoming record of the same name will drop on March 3 via Victory Records.

No, not the state—Hawai, the band, have debuted the graceful new track, “I’m Not Dead.” It’s just a taste of their new music, which is on the way. On tour now, the promising indie-poppers are also booked for SXSW.

Small Talks are an indie-pop band to calm you down from a busy week. Their atmospheric, chill single “New Dork Pity” comes from the band’s forthcoming EP, Until It Turns To Petals, which is out March 17 via Common Ground Records.

“Tea Colored Radio” by the Head does not mess around with its straightforward rock mentalities. A nice introduction to the Atlanta-based trio’s album Space, slated to drop later this year.

One of AP’s past “12 bands you need to know” under the name Fasit, Taking Names dropped their new EP, Trap City, yesterday, Feb. 24. The lead track, “Say Anything,” displays the Norwegian’s group pop-rock meets pop-punk mentality.