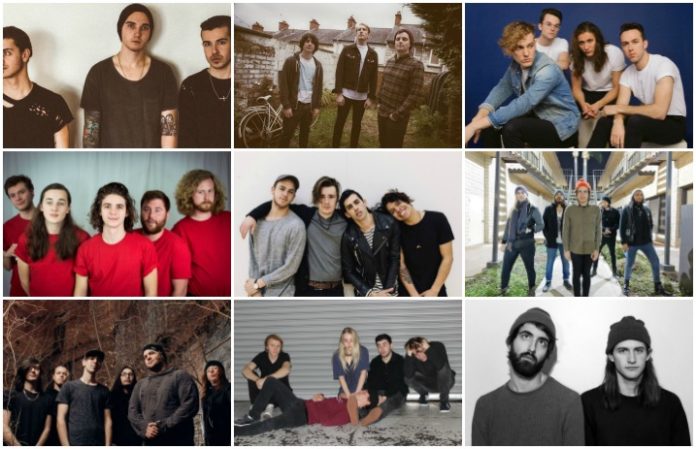 The indie powerhouse behind the hit “Talk Too Much,” COIN had an exciting week: The band announced their first ever headlining tour and released their new single, “I Don’t Wanna Dance.” The track intertwines light as a feather vocals with airy beats, crafting a number that’s impossible not to sing.

Recent Rumors – “Blow Me Away”

Recent Rumors make impeccable pop-rock in similar style of late All Time Low, the Ready Set and the Summer Set. Their debut single, “Blow Me Away,” sets them up to follow in those heavyweights’ footsteps, overlaying a light and catchy chorus on top of perfect pop melodies.

Johnossi are a massively popular duo in Sweden, but the band made an international debut this week with their newest release, Blood Jungle. Blood Jungle drops via Polydor and showcases the duo’s pristine alt-rock, coupling irresistible vocals and groovy guitars.

Welcome to Cleveland, Ohio’s own the Sleeping Sounds: A new indie-pop trio that capitalizes on a sense of escapism with their dreamy, funky jams. The Sleeping Sounds unveiled the Desire EP this week, and its title track is everything you need to play this Saturday evening.

Here's your much-needed introduction to Sad Vegan: A poppy, punky band that features call-and-response vocals from a woman and a man. This track, “New Years, No Fears,” is an upbeat number that hides less-upbeat lyrics about a one night stand. Grab the California pop punks debut EP—Another Life, Another Day—on March 3.

Also hailing from Cleveland, Ohio, Heart Attack Man are signed to Triple Crown/You Did This Records and were previously featured in AP’s “12 Bands You Need To Know” section in the print magazine. “Blood Orange Sun” is the next single from the duo, which promises for more emo-punk vibes on their debut album, The Manson Family, due out March 3.

Staying For The Weekend – “Hell No”

Staying For The Weekend just dropped their new EP, Growing Pains, this Friday. Despite the coming-of-age feel in the title, Growing Pains displays a mature, alternative style on its tracks, exemplified in the single, “Hell No.” The band are now heading to Austin, Texas for SXSW.

Enterprise Earth premiered their new single, “Mortem Incarnatum,” and announced their new album, Embodiment, which will drop on April 14 via Stay Sick Recordings. The band did not mess around with their deathcore label on this track, seen immediately when the track begins.

”Don’t Get It” is a fast-paced punk track from Empty Lungs, a trio from Belfast, Ireland. It comes from the group’s forthcoming EP of the same name. Be warned: You WILL get this stuck in your head after one listen.

The Knitts are a quirky, fuzzy punk-ish band based in Los Angeles. Their new track, “Vamanos Mexico,” has an endearing, old-fashioned feel to it, reminding of British indie rock. Grab the Knitt’s debut album, Retreat, on March 3.

Stories Through Storms – “Jog On”

Stories Through Storms are metalcore band hailing from Kansas City, Kansas. Taken from their forthcoming, second EP, What Keeps Me Up At Night, the newest single, “Jog On,” premiered this week and was a chance for the band to “kick back and have fun,” as they said.

”Skinny Water” comes from Idaho rock band Western Daughter’s debut album, Driftwood Songs, which is set to drop on March 24 via Take This To Heart Records. The track flows as smoothly as water, an easy-going tune to pop on Sunday afternoon.

Dream Beach – “The Kiss Of The Century” ft. Cub

Need to calm down from a stressful week? Check out Dream Beach and their atmospheric “The Kiss Of The Century.” It’s a slow jam that emphasizes the ambient, in the same vein as the 1975’s first three EPs and the Japanese House.