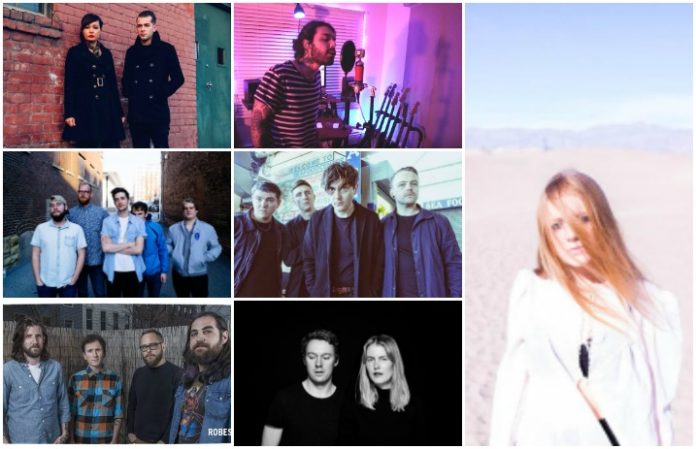 Providence, RI alt-rockers American Wolves unveiled an enchanting cover of the Chainsmokers’ hit, “Paris.” Their original single, “Part Of Me,” has amassed over 400,000 spins on Spotify since its release.

The Cairo Gang – “That’s When It’s Over”

“That’s When It’s Over” comes from Emmett Kelly, aka the Cairo Gang, and is culled from his forthcoming album, Untouchable. The album will be released on God?, which is Ty Segall’s Drag City imprint.

”Damage Control” is the title track from Curtis Peoples' upcoming EP, to be released this April. The track was co-written and produced by Steve Solomon, who is also credited for co-writing Pierce The Veil’s “King For A Day” and “Circles.”

LIFE announced their debut album, Popular Music, this week. “In Your Hands” is the fast-talking first single, echoing the politically-charged feel of the entire forthcoming record it’s taken from.

ROBES combine a classic rock and a post-hardcore sound. “Lay Low” is taken from their debut LP, which drops on March 17.

Swordfish are releasing their album, Rodia May 5 via Take This To Heart. “Social Drinker” is the newest taste of Rodia, which can pre ordered here.

Tuvaband – “Everything We Do Is Wrong”

Tuvaband are a Norwegian duo who released the atmospheric track, “Everything We Do Is Wrong” this week. They’re gearing up for a showcase at SXSW.

Weslynn may just be your new addition: The alt-pop band released a cool video for their track “Black” this week, which is culled from their EP Black & Champagne.

WRENN’s “Cease Fire!” is an angry song—everything you need to release aggressions from the week. WRENN is a 20-year-old solo artist, hailing from Southern California.

XYLØ are an enchanting brother-sister pop duo based in Los Angeles. They possess an impressive resume—everything from being featured in Apple’s keynote for AirPods to being featured on a Chainsmokers track. This week, they dropped the addicting single “I Still Wait For You.”

Black Veil Brides are already working on their next album