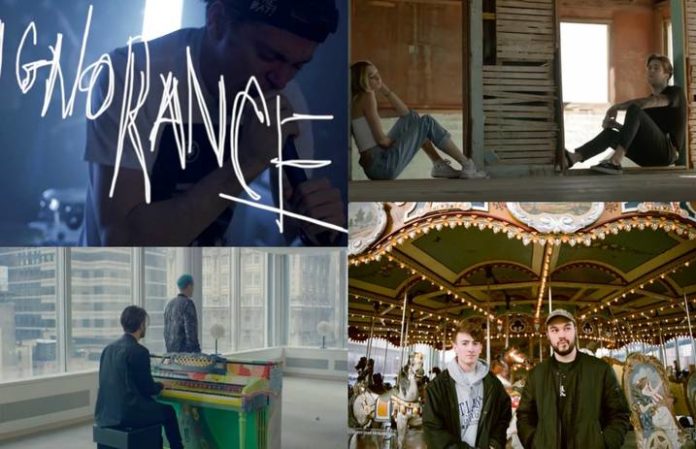 1. BBC Radio 1 Rock Show put together a Christmas message featuring some of your favorite bands, such as State Champs, Set It Off, Creeper, Killswitch Engage, Young Guns, Enter Shikari, Sum 41 and more!

2. Jake Holland has created everything the scene needs for Christmas. Watch Christmas Metalcore Interuptions—part one and two—and enjoy:

In addition to new music expected in 2017, the band will also be headed on a spring tour with Moose Blood, Trophy Eyes and Boston Manor. Check out the full list of cities and dates below!

Alabama is joined by her brother Landon on drums, and it's clear that both of them have inherited lots of music talent from their father.

5. Earthists. has given us a preview at their debut album with the release of “Resonating Light”

The band will be releasing their debut album next year. If you liked the single, you can purchase it here.

6. Project of Valencia vocalist Shane Henderson, Promise Of Redemption announced a series of shows for after the New Year.

Promise Of Redemption latest release is Where You Ought To Be. Dates:

The Long Island punks have played with the likes of Such Gold, Koji, Broadside, A Will Away, Light Years, Head North, Casey Bolles and more.

9. morgxn’s track “Home” has over two million plays on Spotify. “From behind a lost piano,” watch the singer’s alternate version of “Home”:

The video was shot in Sing For Hope’s studio on Manhattan and released via Vevo.

10. Tragic Hero’s Moments Till Fall premiered a new video for their track, “Heisenberg & Pinkman,” expressing the struggles they’ve faced as a band in the past.

11. After releasing their debut EP last Sunday, Phoenix, Arizona’s Smile On The Sinner released a video for their heavy track “Disbelief.”

The band played their EP release show on Dec. 18 with the Word Alive, Volumes, Islanders and Invent, Animate.

Here’s the video for “Disbelief”:

Here’s the video for their last single, “Wish I Was Dead”:

13. Alteras announced a co-headlining tour with Thieves. Thieves recently released No Motive in late November. Check out the tour dates below.

Watch more: “We’re just trying to do it right”—Motionless In White on new album due early 2017