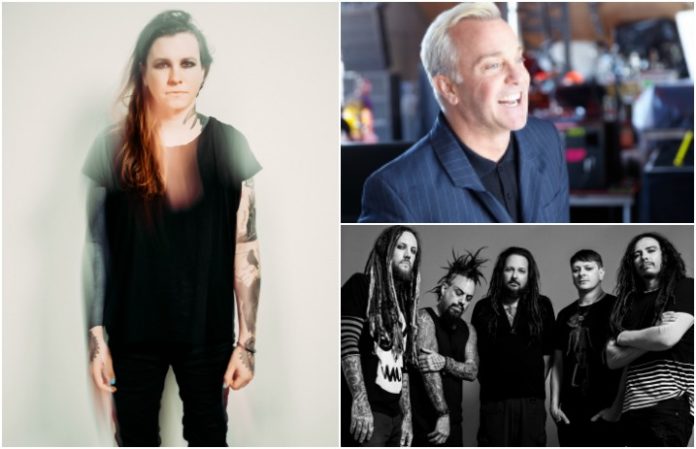 In addition to the presenters and performances added to the already stellar lineup, the 2017 Journeys Alternative Press Music Awards are also pleased to honor three of today’s biggest and most influential musicians with the event’s top honors. Multi-platinum GRAMMY® winning hard rock/metal legends Korn will take home the Vanguard Award, trailblazing musician Laura Jane Grace of critically acclaimed rock band Against Me! will be honored with this year’s Icon Award, and Goldfinger frontman and producer John Feldmann will receive the inaugural Influencer Award.

The APMAs Icon Award is given to an artist or group that has inextricably linked themselves to a defined aspect of the cultural history of rock. The recipient has been recognized by both peers and fans as a foundation for change and inspiration, both sonically and culturally. Laura Jane Grace is the founder and frontwoman of powerful punk band Against Me!, whose strident live performances are the closest thing this generation has gotten to the Clash. By remaining true to her punk-rock ideals and creating stirring anthems transcending generations, Grace has created an awareness of transgender politics and culture in a way that parallels the human condition. She has become a torchbearer for real, unvarnished punk rock and a steadfast advocate for the LGBTQ community.

Laura Jane Grace tells Entertainment Weekly: “It’s flattering as f*** to be given something like that or be acknowledged in that way… It’s really an honor… I think that’s really commendable of [AP], for shining light on [the LGBTQ community] by having me there. That’s a really awesome thing for the event.”

PVRIS vocalist Lynn Gunn will present Laura Jane Grace with her award. “I’m honored to be presenting such a deserving award to Laura Jane Grace,” says Gunn. “I have the utmost respect for her, not only for the paths she’s carved in music but also in the LGBTQ community. She is most definitely an icon.”

The APMAs Vanguard award is bestowed to an artist or group who have contributed groundbreaking works to a music culture. Over time, the recipient has challenged themselves and influenced those around them to re-invent music in the pursuit of the unexplored. Their efforts shatter the status quo and define the foundation for trends within a number of music genres. Over the course of two decades, Korn have not only built a career with their patented rap/metal hybrid, but also have become an enduring sonic force in heavy music. By coupling unvarnished emotions with hard rock, Korn were able to access the angst of a generation, cementing the band’s status as bona fide rock legends. They have served as a gateway into heavy music for countless bands across multiple genres, maintaining a hip-hop vibe with a full metal racket.

Korn frontman Jonathan Davis says, “All of us in Korn started out just like every other musician; a fan of music. Growing up in the 80s and 90s, we accumulated a great love and appreciation for all different genres of music; rock, metal, new-wave, alternative, industrial, R&B, hip hop – you name it. When we started Korn in ’93, we were adamant in our pursuit to create a heavy band with a sound that would embody all of the many genres of music that Korn members loved. Our unique sound, along with the real and raw emotional lyrical content in our songs, connected with a colossal amount of fans that none of us thought was possible. We are so grateful to have almost a quarter century in the music industry under our belt, and we’re so incredibly honored to be awarded the APMAs Vanguard award.”

Corey Taylor, frontman for dynamic rock bands Slipknot and Stone Sour, will present Korn with their award. “Years ago, I was inspired by this crazy band from California. Years later, they became my friends and allies,” says Taylor. “Now it's my great pleasure to help honor them for what they've done and have given to the world. It's going to be a great night.”

The Influencer Award is given to someone in the music industry who has changed the landscape sonically, professionally and culturally. This person has acted as an innovator on their own behalf as well as being a creative conduit for others looking to further define their own particular aesthetic. They are the visionaries, they light the fuse: They are the influencers. Few musicians in this scene have attained the kind of success John Feldmann has enjoyed throughout his career. Since Goldfinger cemented themselves as one of the most legendary entries to the third-wave ska movement in the mid-’90s, Feldmann has been a ubiquitous underground heavyweight. He later left his mark on the scene behind the boards, developing young bands such as the Used, Story Of The Year and 5 Seconds Of Summer. Whether working with budding acts or pop-punk legends, Feldmann has been helping bands harness and hone something deep within themselves for nearly 20 years.

This year’s APMAs host – Black Veil Brides frontman Andy Black, mastermind and star of the upcoming film American Satan – will bring his love of comedy to life on the main stage. Biersack is nominated for Album Of The Year for his debut solo effort The Shadow Side and Song Of The Year for his dance floor anthem, “We Don’t Have To Dance.”

There are less than 10 days left to cast your vote for your favorite artists, so be sure to make your voice heard here by June 30. Check out a full list of nominees here.

There are tons of other amazing artists that have been announced to perform, including All Time Low, Against Me!, Andrew McMahon In The Wilderness, Bone Thugs, Korn, Machine Gun Kelly, New Years Day, ONE OK ROCK, Pierce The Veil, The Pretty Reckless and Sleeping With Sirens, Waterparks and an epic group drum performance featuring Adrian Young (DREAMCAR, No Doubt) vs. Frank Zummo (Sum 41, Street Drum Corps) and a secret special guest you will not want to miss.

Read more: QUIZ: Which 2017 APMAs Album of the Year nominee are you?