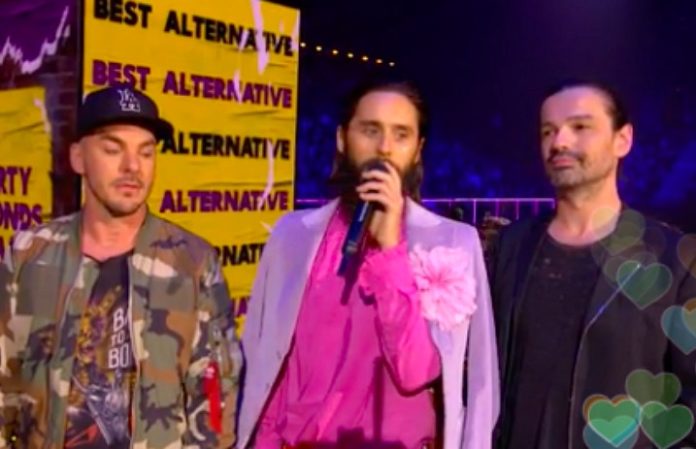 30 Seconds To Mars have won Best Alternative Act at the MTV EMAs! The band used their acceptance speech as a chance to thank fans, referencing America as the “land of immigrants.”

Watch the speech in full, below.

The MTV EMA's are taking place tonight at SSE Arena Wembley, and the show has been nothing short of amazing. Eminem kicked things off with a live premiere of his new single “Walk On Water” and also collected the award for Best Hip-Hop. Kendrick Lamar has landed the award for Best Video with “Humble” while Shawn Mendes has walked away with the award for Biggest Fans.

30 Seconds To Mars are now on the list of winners, taking home the award for Best Alternative Act.

“We are Americans – a land of immigrants – and we just wanna say that we welcome you with open arms and with open hearts, and we love you. God bless you. We hope to see you on tour in March and April. We will be coming back to the UK as well.”

You can watch Leto's EMAs speech, below.

The band recently announced a massive 2018 European tour in promotion of their upcoming fifth album. Check out the list of dates below!

What do you think of 30 Seconds To Mars winning Best Alternative Act? Let us know in the comments below.