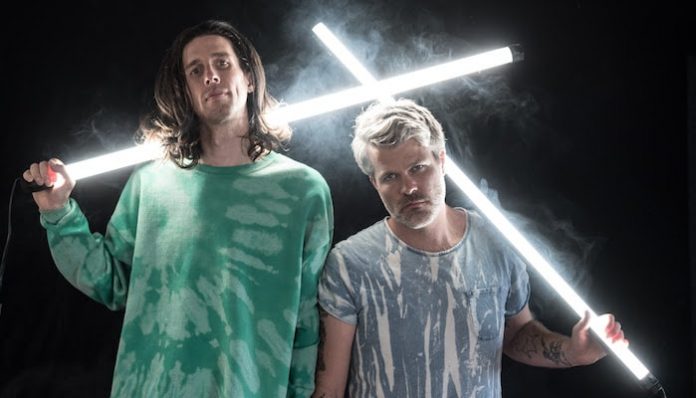 It’s been four years since we last heard new music from 3OH!3 with their studio album NIGHT SPORTS. Now, it looks like the wait for new music is almost over.

This week, the duo teased their highly-anticipated return with a nostalgic teaser that offers a look back at their career and some of their iconic hits.

Read more: The internet has a lot of thoughts on McDonald’s new McPlant burger

3OH!3 first grew in popularity in the mid-2000s with their hits “DONTTRUSTME,” “STARSTRUKK” and their collab with Kesha “My First Kiss.” Then, in 2016, 3OH!3 released their last full-length album NIGHT SPORTS. Featuring the songs “MAD AT YOU” and “CLASTRAPHOBIA,” it’s hard to believe fans haven’t new tunes from the Denver-based duo since then.

Now, it looks like the wait for new music is almost over. This week, 3OH!3 confirmed that new music is on the way with a nostalgic look back at their years as a band. The teaser features footage of them performing their iconic hits in front of crowds at Warped Tour and other worldwide festivals.

Throughout these last four years, both Sean Foreman and Nat Motte found themselves itching to make new 3OH!3 music. Earlier this year, the duo came back together in their hometown of Boulder. Together, they wrote and recorded new music just before the coronavirus quarantine.

Nat exclusively told Alternative Press that both he and Sean have done a lot of reflection on 3OH!3’s career over the years.

“We’ve been a lot of places since we started making music together in a University of Colorado dorm room in 2003,” he says. “We’ve had the good fortune to tour all over the country and all over the world, partying with wonderful people all along the way. Our music has always been about having fun, welcoming people in, bringing the energy and pushing some sort of boundary.”

After years of working on other artists’ music, however, the duo realized it was time to put more 3OH!3 music out into the world.

“After having worked on a lot of other peoples’ music in the recent years, we wanted to come back to our own music as 3OH!3 and rekindle that energy,” he continues. “We channeled that in the best way we could, and we wanted to find things in life to celebrate, to make music to dance to, to cry to, and to laugh to. I can tell you one thing for certain – we had a whole lot of fun making these new songs, and if it brings anyone else an ounce of that joy, we can rest easy.”

For this next chapter in their career, 3OH!3 are doing things a little bit differently. Both Sean and Nat are returning to their roots and where they got their start by re-signing to Photo Finish Records. 3OH!3 put out their legendary 2008 album WANT under the label before eventually signing to Fueled By Ramen.

WANT includes the mega-hit “DONTTRUSTME” which went on to reach No.1 at Top 40 Radio and No.7 on the Billboard Hot 100. Even today, the song is still widely popular with over 123 million streams on Spotify.

For now, 3OH!3 fans will have to keep an eye out for their music which should be dropping at any time. In the meantime, “DONTTRUSTME” can be streamed below.

What are your thoughts on 3OH!3 reuniting? What do you think their new music will sound like? Let us know in the comments below.