Is No Shame more than just a tour title?

5 Seconds Of Summer are currently wrapping up a handful of shows for 2019, but the foursome are already teasing 2020 plans.

5SOS recently announced a U.K. and Europe tour, but with it, they launched an album preorder for a release that hasn’t been revealed yet.

The band took to Twitter today to remind fans of the new preorder package, which comes with early access to the No Shame 2020 tour dates. The new album confirmation comes after a a studio update at the beginning of 2019 and several singles throughout the year.

Once accessed here, fans are taken to a landing page where they must choose between the CD or cassette. Both products feature the same temporary image that reads “(PHOTO STILL DEVELOPING).” Below it, the description says it will be released in 2020 with “more info coming soon.” 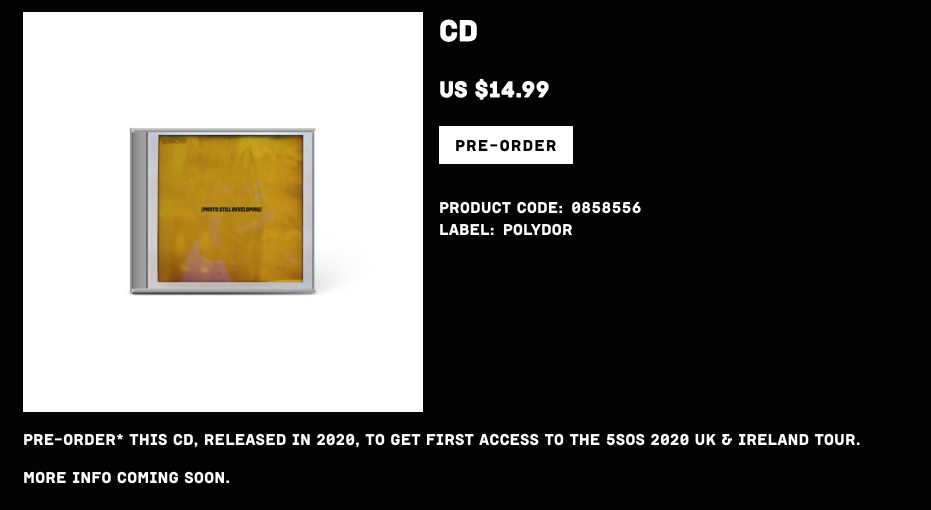 One fan increased the contrast on the image suggesting it means literally “developing” like film and the cover is hidden in the background.

Fans immediately started speculating that “No Shame” has something to do with the new era. Some started theorizing it would be the name of the album.

WAIT SO ITS HAPPENING ALREADY 🥺🥺🥺🥺🥺🥺🥺🥺 the album is called no shame i’m guessing? https://t.co/pqygb99PZj

SO IS THE ALBUM CALLED NO SHAME??

but is the album called no shame or?

Fans discovered that Genius features lyrics for a track titled “No Shame” and another one titled “End It” the latter of which is credited as featuring Halsey. According to the lyrics site, “No Shame” will arrive Dec. 16 with the Halsey collab dropping Feb. 14.

NO SHAME IS RHW TOUR NAME BUT ALSO THE NEXT SINGLE??? ITS SUPPOSEDLY A CALUM SOLO SINGLE AND SO FAR UK DATES BUT TALK FOR RELEASE AROUND SPRING 2020 FOR ALBUM IDK BOUT THE SINGLE BUT YEAH pic.twitter.com/URhQqN1aUn

PLEASE FORGET NO SHAME RELEASE END IT ITS WITH HALSEY MY QUEEN pic.twitter.com/BPcxaER74o

Y'all these are the rumored tracklist for #5SOS4, i just saw this on Facebook pic.twitter.com/TmrF1DyBqj

Even with this in mind, some are split between it being the name of the album and single or possibly both.

wait do we think no shame is the name of the album title or just the next single??? hmm

do you think ‘No Shame’ is the name of a song on the new album or just the album name??

While some just think it’s the tour title.

Fans are also keeping their fingers crossed that an announcement will come with the tour’s general on sale this Friday.

With another clue to the new era in “no shame,” fans started thinking back to teasers dropped throughout the year. Back in May, the day before “Easier” was released, drummer Ashton Irwin shared an image of the track title with the caption “No Shame.”

Ahead of the tour announce, Calum Hood replied to a question regarding a favorite 5SOS track with stars that many fans believe represents the missing letters for “No Shame.”

If preordered by 5 p.m. GMT, fans will receive early access beginning Dec. 4 with general on sale launching Dec. 6. Check it out here.

More on 5 Seconds Of Summer

Back in January, just a few months removed from the release of their third full-length Youngblood, 5 Seconds Of Summer revealed they had already begun work on its follow-up.

Guitarist Michael Clifford appeared during the Gibson Experience at NAMM 2019 in Anaheim, California. While there, he revealed his new signature guitar, the Melody Maker. The new guitar wasn’t all he shared, however, with Clifford revealing future plans while at the panel.

Read more: Michael Clifford (5 Seconds Of Summer) on “the best guitar that [he’s] ever played”

“We actually just started working on our fourth record on Monday,” he said. “So it’s happening, it’s in the works and it’s happening right now.”

When questioned on a release timeline, Clifford says, “Who knows. We’re looking at all possibilities, it could be this year or could be next.”

Since the release of Youngblood, 5SOS have unveiled several new tracks and remixes. First up was a new version of album track “Lie To Me” featuring Julia Michaels. The band later teamed up with current tourmates the Chainsmokers on “Who Do You Love?”

In May, the band dropped a dark new single, “Easier” followed by “Teeth.” The latter track appeared on the 13 Reasons Why season 3 soundtrack and later sparked a hilarious #TEETHChallenge. Check out the new single below.

5SOS are wrapping up he World War Joy tour tour with the Chainsmokers this week ahead of a handful of holiday shows. Check out their remaining U.S. dates below with a full list and tickets here.