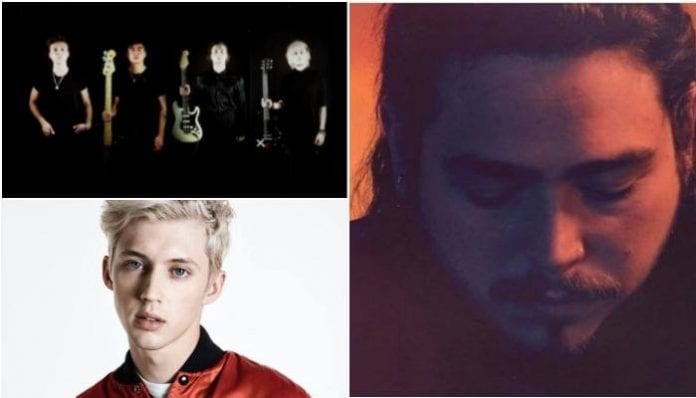 Post Malone may be cursed (no really, ask Zak Bagans from Ghost Adventures) but that doesn’t mean he hasn’t been receiving high praise from fellow musicians for his musical talents.

The praise came in the form of two separate podcast episodes of Spotify’s new Under Cover podcast.

During their episode of the podcast, Australian pop-rock group, 5 Seconds Of Summer talked about how they got their start with doing song covers, and how they ended up selecting Post’s Beerbongs & Bentleys‘ track “Stay” to cover.

Noting that they could take his influence from the track and add to it with their own style, the band said of the cover:

“He obviously seeked influence off bands, and I think we could serve that song by adding a band’s musicality to a song like that,” the band shared. “I think ‘Stay’ appropriately represents a modern twist on the past and today’s music, which is cool.”

Listen to 5SOS’ episode below:

He continued on by saying:

“Deciding to cover ‘Better Now’ was my decision, I love the song and at the end of the day, it’s a pop song. It’s a really good one too.” Sivan revealed. “‘Better Now’ is [an] undeniable 2018 smash song. It sounds exactly like this year and exactly like what the world is obsessed with right now.”

Of his version of the track, Sivan explained that he decided to flip the track’s original sound on its head by doubling the acoustic guitars and his vocals: “It makes everything sound kind of classic and I thought it would be fun to flip a super contemporary song its head in that way.”

Listen to Troye Sivan’s episode below:

Listen to both covers below:

What do you think of Troye’s and 5SOS’ covers? Sound off in the comments below!