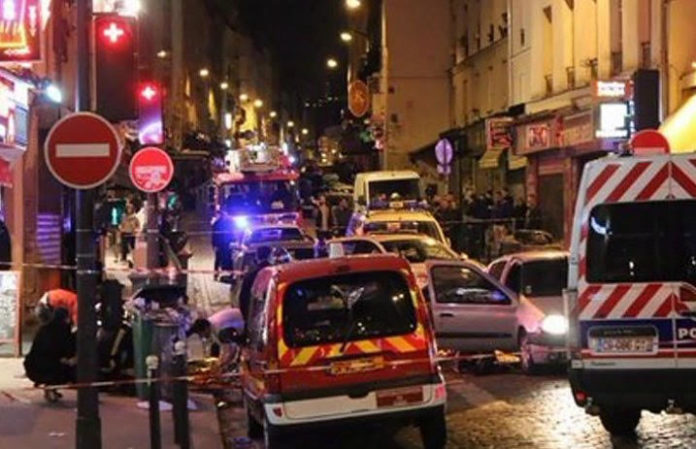 Tragedy struck Paris late Friday evening when numerous terrorist attacks were launched upon the city. One targeted the Bataclan Theatre, where American rock band Eagles Of Death Metal were performing. While some concert-goers managed to escape, many were held as hostages. Following a police raid of the venue, reportedly 118 people were found dead, while at least an additional 100 others were freed.

Read our live update below.

According to WSB-TV 2 Atlanta, brother of Eagles Of Death Metal touring drummer Julian Dorio, Michael Dorio, has offered the following regarding the situation. “He said they were playing, about six songs into the show, and they heard, before they saw anything, they heard automatic machine gunfire. And it was so loud, it was louder than the band, and they all hit the stage floor. And as they got up to try to evacuate they saw men with machine guns just shooting anything and everything in the venue.”

He added that Julian is okay, and with police officials. Julian rew up in Atlanta and graduated from the University Of Georgia.

Video of France's president arriving at the Bataclan Theatre just moments ago.

CNN reports that at least 118 people have been killed inside the Bataclan Theatre.

An additional 1,500 troops have reportedly been mobilized throughout the country.

French group Chunk! No, Captain Chunk have confirmed their safety.

We're all safe guys, thanks for asking! Our thoughts are with everyone affected by these terrible events tonight… #parisstrong

At point in time, roughly 100 people have reportedly been killed in the Bataclan Theatre where Eagles Of Death Metal were performing tonight.

#BREAKING Around 100 dead in attack on Paris concert venue: police

Two Paris police officials have confirmed that their raid on on the Bataclan Theatre has ended, and that they have killed at least two attackers in the process.

Eagles Of Death Metal have shared an official statement through their Facebook page, which states that they are still attempting to determine the safety and whereabouts of their members and crew. Our previous update revealed that a relative of the band's frontman reportedly confirmed their safety.

We are still currently trying to determine the safety and whereabouts of all our band and crew. Our thoughts are with all of the people involved in this tragic situation.

CNN reports that police have brought out over 100 hostages, and that some appear to be wounded.

Police are currently raiding the Bataclan Theatre where hostages are being held.

Closure In Moscow, who performed the European leg of their tour in Paris tonight, have confirmed that they are safe and on their way out of the city.

Hey everyone,
Tonight we played our leg of the European Tour in Paris.
Just letting everyone know that we are all safe, and currently on our way out of the city. We will be sure to update everyone when we are out and clear of everything that is happening.

Our thoughts and love go out to everyone that has been effected by this terrible night so far.

While addiitonal members of Eagles Of Death Metal have escaped, the status of crew members remains unknown, according to The Washington Post.

We have received confirmation that all members of Deftones, who were scheduled to perform in France over the next three nights, are safe.

According to KESQ News Channel 3, Eagles Of Death Metal frontman Jesse Hughes escaped from the Bataclan Theatre through a back-door exit.

A concertgoer who was inside the venue at the time of the attack:

Concertgoer who was just released from le Bataclan, shirt bloodied (“the blood of others”). https://t.co/SjxxB24ogr

The Associated Press reports that the president of France has issued a state of emergency and closed the country's boarders. Military has been deployed around Paris. U.S. President Barack Obama has called the attack an “outrageous attempt to terrorize innocent civilians.”

According to French radio Europe 1, shots have also been fired at Les Halles, a shopping mall in the center of Paris.

The president of France has spoken out:

A representative for Eagles Of Death Metal has confirmed that band member Eden Galindo is unharmed.

A terrorist attack and hostage situation has erupted in Paris and is currently ongoing.

Several explosions have gone off at football stadium Stade de France where French president Francois Hollande was attending a match, and at least three shootouts have broken out in local restaurants.

60 hostages are being held at Bataclan Theatre, where Eagles of Death Metal were playing tonight. The Associated Press reports at least 15 dead at the concert hall.

Friends in Paris, please be careful. Terrorists taking hostages at Eagles Of Death Metal concert and around the city.

Reported explosion can be heard in this vine during Germany/France friendly at Paris stadium: https://t.co/dKePiW6byC

Breaking: hostages are at Bataclan concert hall in Paris. Where band Eagles of Death Metal had a show. Deftones scheduled there next 3 day

Thinking of Paris today, and all of the wonderful people I've been able to meet there. Stay safe.

Police: At least 26 dead in violence around Paris, hostage-taking in theater: https://t.co/juS8I3bsz8

We are worried for the people of Paris, our friends an family. Hope you are all safe. Our hearts and prayers are with you.

Thoughts and prayers to everyone in Paris. ����

We’re extremely sad to hear about the situation in Paris. Sending our prayers and thoughts to the victims and their families.