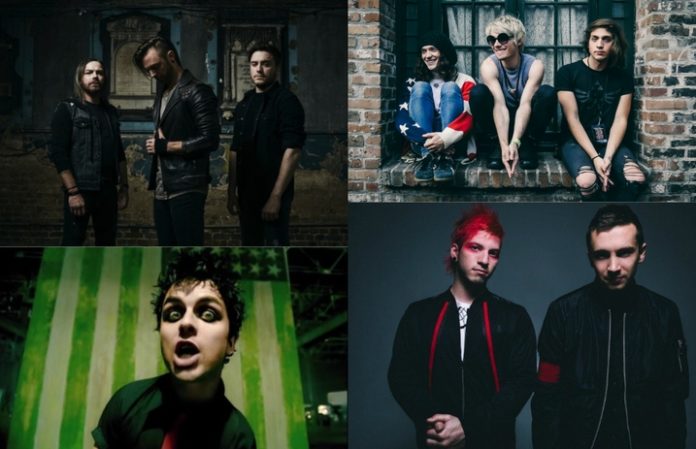 The band also performed their single, “Bang, Bang,” which you can catch below:

Green Day accepted the MTV Global Icon Award at the EMAs this year.

2. Twenty One Pilots took home two accolades at the EMAs (best live and best alternative), and their reaction on Twitter was almost too much to handle:

@tylerrjoseph that's so sick. also I saw we won the best alternative thingy too. that's two trophies for us tonight brahddy

@tylerrjoseph no one says no duh anymore.

3. Waterparks released a new music video for their track, “Stupid For You.” You have to watch—it's so much fun:

4. Hard rock heavyweights Bullet For My Valentine released their first single since signing to Search and Destroy/Spinefarm Records. Listen to “Don't Need You” below:

The track was produced and mixed Colin Richardsonand Carl Bown, and the accompanying video was directed by Ville Jurrikkala.

“It's heavy, it's dark, it's super-epic, it's signature Bullet, and I think when people hear it they'll lose their shit,” frontman Matt Tuck says about the song. “We love it, and I think it's a hint of where the band is going next.”

Bullet For My Valentine are gearing up to start work on their new album, the first on Search And Destroy/Spinefarm.

5. InVogue Records is debuting a Christmas compilation on Nov. 25, featuring Chase Huglin, Courage My Love, In Her Own Words and more. It'll be available via BandCamp for free download / pay what you want until New Year's Day. Any money raised will go here, in honor of the vocalist of In Her Own Words brother. The Jason Christopher Wilhelm Scholarship Fund acts to”provide scholarships, give assistance to cancer patients, and promote cancer awareness and research.” Check out the tracklisting below:

In Her Own Words – Yule Shoot your eye out
Chase Huglin – Christmas Eve / Pierceton Queen
Hotel Books – Christmas Eve Until I Leave
JT Woodruff – Down Patton Hill (Christmas '85)
Woven In Hiatus – Joy
Mark Rose – It Won't Be Long Now
Convictions – Memories In The Attic
Mirror Eyes – Of All The Charlie Browns In The World, I'm The Charlie Browniest
Punchline – I Always See You In December
September Stories – Christmas '12
Courage My Love – Last Christmas

There will also be 100 limited edition CD's for sale.

6. Mayday Parade is looking for you to share your tale to celebrate the ten-year anniversary of Tales Told by Dead Friends. They plan on posting some of the stories people leave on their website.