The new A Day To Remember album is on the way!

Earlier this week, A Day To Remember released an anthemic new single “Degenerates” and announced their signing to Fueled By Ramen.

Now, following last night’s last-minute, intimate and free show at House of Vans London, it appears that details of the band’s forthcoming album have finally surfaced.

“Degenerates” is the band’s first track in three years besides their collab “Rescue Me” with Marshmello earlier this summer.

If you haven’t had the chance to check it out yet, listen to it below!

Last night, the band played a show at House of Vans London that was free for fans to attend.

I will never tire of seeing @adtr live even after my 11th show. fucking love those guys so much and cannot wait for the new album. and also credit to the security at @HouseOfVansLDN who were holding uo that fence like fucking champions ???#yourewelcome #ADTR pic.twitter.com/lwI4UNGxQ3

It’s always nice when one of your favourite bands plays their first show in the UK after 2.5yrs, even better when it’s free and in a tiny venue. Tonight was mad @adtr ?? pic.twitter.com/3tWzMIFnT7

Earlier that morning, a photo of a poster surfaced on Twitter with the words “YOU’RE WELCOME” and “A Day To Remember.”

A similar image also appeared on Chorus.FM that states the album title will be “You’re Welcome.”

“That song is going to come out on a record later this year,” McKinnon says in a video from RockSound. “That’s with our friends in Fueled By Ramen. Let’s hear it for Fueled By Ramen! It’s gonna come out on that label, and we’re gonna call that record ‘You’re Welcome’.”

They announced it at the gig.

New A Day To Remember album out in November pic.twitter.com/jHRbE4Xitu 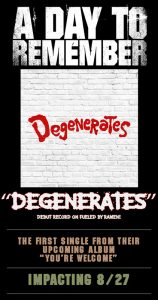 Alternative Press also reached out to A Day To Remember’s team for comment, and they have confirmed You’re Welcome is due out later this year.

As previously stated, the band recently announced the Degenerates tour with I Prevail and Beartooth.

Grab tickets for the shows here. Check out the full list of dates below.

Are you excited for a new album from A Day To Remember? Sound off in the comments below!