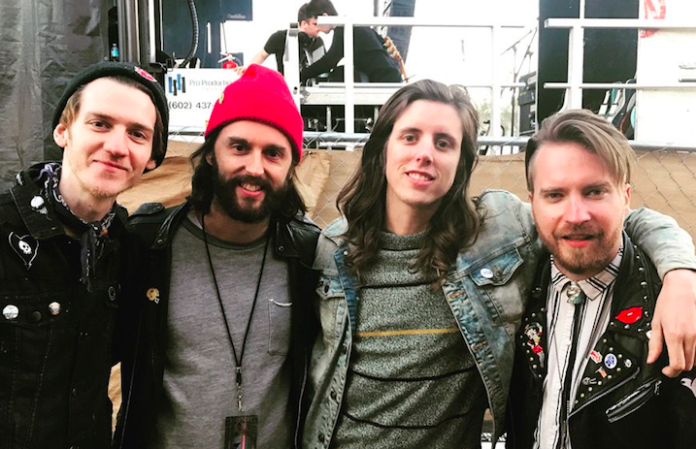 A Rocket To The Moon called it quits almost four years ago. But last night they were back on stage together for a performance at the Maine's 8123 Fest.

No—we're not kidding. See footage below.

Read more: 10 things that make 2010 seem like a hundred years ago

Before disbanding in 2013, A Rocket To The Moon released two records through Fueled By Ramen: 2009's On Your Side and 2013's Wild & Free. The former contained their unforgettable single, “Like We Used To.”

A Rocket To The Moon broke up only six weeks after the release of Wild & Free. AP talked to frontman Nick Santino after the sudden goodbye. Here's what Santino had to say about the decision:

“The last year has been a real headache; the last eight months have been kind of weird. Just to start off, the four of us are still best friends. Justin [Richards, guitarist] and I actually went off to do a little charity show last weekend in Florida. Usually, bands break up and there are stories about the singer being a douche and the other guys starting a new band. That’s not us; there was no big blowup.
“It was something we’d been talking about for a few months, honestly. The music business isn’t really that fun a place. It’s a lot of sit around and wait for answers from the powers that be. You’ll get told a different answer every time you ask something. It got to a point where we were just ready to try something different. We wanted to keep progressing and for our record to do well, but whoever is in charge of that wasn’t really helping us out too much.”

Santino went on to lead his own solo career. He now fronts indie-pop rising stars Beach Weather, who have toured with the likes of PVRIS, Against The Current and Sleeping With Sirens. Beach Weather just released their second EP called Chit Chat, were on the bill for 8123 Fest and are slated to open up for the Maine on their forthcoming tour supporting their newly announced album, Lovely Little Lonely.

Held this weekend, 8123 Fest is celebrating the Maine's tenth anniversary as a band, featuring performances by the Summer Set and Speak Low If You Speak Love.

A Rocket To The Moon hinted at the special set on socials.

Watch more: [email protected]—Behind the scenes of catering with Nick Santino from A Rocket To The Moon