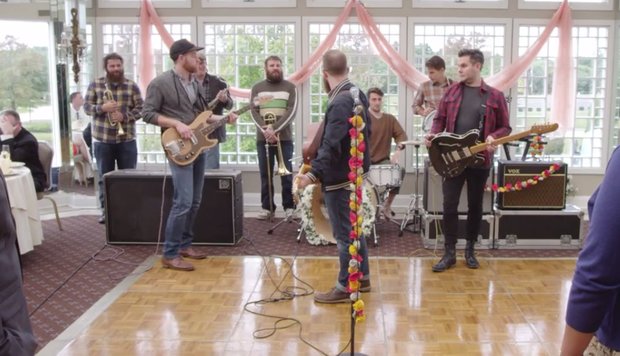 Aaron West And The Roaring Twenties, the solo project of Wonder Years frontman Dan “Soupy” Campbell, have debuted a music video for their song, “Our Apartment,” which features the group performing as a wedding band.

Campbell explained the concept behind the video saying, “In writing the concept for this, I found myself really engaged by music videos where a band plays to a hostile audience. I love the idea that it functions primarily as a performance video but that it has a storyline element as well. I watched The Mountain Goats get kidnapped and forced to play for a crime syndicate in their video for “This Year.” I watched Bright Eyes play to an angry cowboy bar in “Four Winds” and I thought about what the perfect hostile audience for Aaron West would be.

We had created a concept album that centered around a bitter divorce and I wanted the music video to exist in that universe. I came to realize that, as a wedding band, Aaron West and The Roaring Twenties would be putrid, playing sad-sack songs about a failed marriage as a young couple tries to celebrate the dawn of theirs. I took the concept to director Eric Tetiand we talked over the details; the angry father of the bride, the confused flower girl and the horrified couple, having their first dance ruined. We were going to be the worst wedding band of all time.”

Watch the clip below and let us know your thoughts!