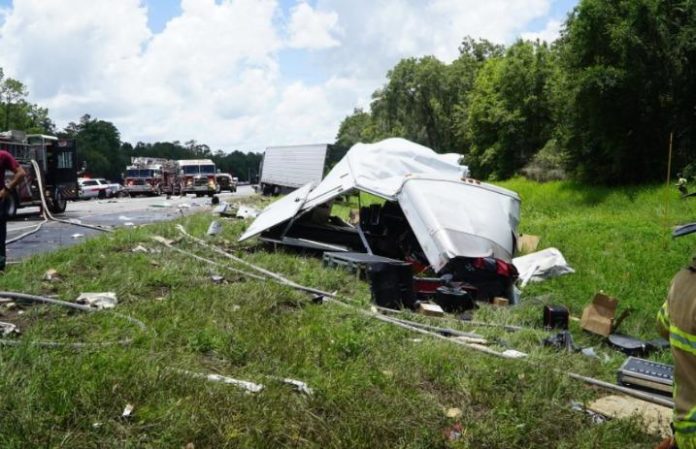 Adrenaline Mob have released individual statements regarding the fatal crash that claimed the life of the band's bassist, David Z.

Vocalist Russell Allen took to Facebook to release, “Yesterday I was involved in an accident that took the life of my dear friend and bandmate David Z Rock and left 3 of our crew in critical condition. I'm overwhelmed with sorrow. I am so grateful for the out pouring of love we have received from around the world. Please continue to pray for David's family during this difficult time. And those in critical condition. I want to personally thank Marine Lance Cpl. Patrick Dumon for his bravery in assisting me to pull our drive Jason from the wreckage and for attending to his wounds. And for helping me to secure and attend to Jane once I was able to get her free from the fire. Without his selfless act of courage I would not have been able to get them clear of the RV before it was engulfed in flames. On behalf of my band and crew I thank you.” You can see Allen's full post below.

Guitarist Mike Orlanda also made a brief statement. “I can not begin to thank you all for all the prayers & thoughts. I'm trying to process & deal with this, physically & mentally… so I'm sorry for being vague. We've literally experienced hell on earth… I'm absolutely broken, both physical & mental. I love you Dave, I will miss you more than words can say. You were one of the sweetest souls I've ever known.”

Drummer Jordan Cannata also offered his appreciation for all the love and support the band had received. “Hi everyone. I don't even know where to begin so I will start by saying thank you for all of the love and support from everyone. We are all devastated and will need some time to physically and mentally cope but the outpouring of love has been nothing short of inspiring. David Z… I love you, I miss you, and send my heartfelt condolences to your family and friends. To the rest of my band mates and crew, I love you all. Please keep everyone involved in your thoughts and prayers. Thank you everyone. RIP David Z.” You can see Cannata's post below.

More details have been confirmed in a fatal crash that left one member of rock band Adrenaline Mob dead. According to Gainesville.com, we can now also confirm the identities and state of all survivors as follows:

New York-based Adrenaline Mob were involved in a fatal crash Friday afternoon after a tractor-trailer veered off Interstate 75 and struck the band’s RV after they had pulled over with a flat tire, reports The Gainesville Sun. According to Disturbed bassist John Moyer, it has been confirmed that Adrenaline Mob bassist David Zablidowsky has passed away.

Crash on I-75 near Micanopy. FHP says there were three vehicles involved. One fatality confirmed at this point. pic.twitter.com/UMUaf8AtVS

FHP confirms one fatality in crash on I-75. I'm headed to the scene now. Pictures credit: @AlachuaSheriff pic.twitter.com/9ohsl8jI6N

A total of nine people were in the vehicles. One has died, and six were taken to area hospitals following the accident, The Gainesvill Sun reports. Of the six injured, three are in critical condition and the other three are in stable condition, as of Friday evening.

The band were en route from Biloxi, Mississippi to St. Petersburg, FL where they were scheduled to perform at the State Theater.

The band’s sound engineer, who was in the bunk of the RV, said he “heard a boom” when the truck hit the RV.

According to the news source, as of 6 p.m. Friday, the patrol had not identified the deceased or injured, reporting that the deceased had been in the RV at the time and the injured include band members.

But as of two hours ago, Disturbed's Moyer shared a sorrowful message on Instagram, confirming Zablidowsky's loss and expressing his grief. “This talented, humble, sweet soul left us today way too soon.”

This talented, humble, sweet soul left us today way too soon. If you saw him perform you were lucky. If you knew him you were blessed. RIP David Z. You were a beast on stage and it was my pleasure to have shared it with you on your last days. Going to miss you brother.

In addition to his work with Adrenaline Mob, Zablidowsky was also the bassist for Trans Siberian Orchestra.

We will update as the story develops.