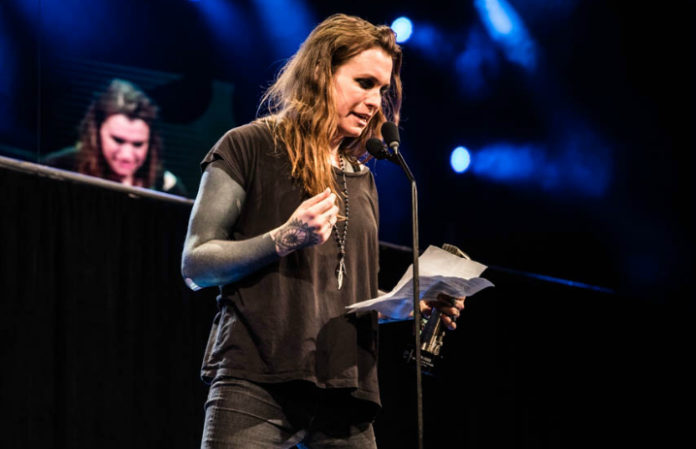 PVRIS vocalist Lynn Gunn presented the Icon award to Laura Jane Grace, founder of strident punk band Against Me!, at the APMAs.

As the founder of Against Me! (along with guitarist James Bowman), Grace brought a great sense of raucous character and excitement to America’s early-2000s punk underground with such acclaimed works as Against Me! Is Reinventing Axl Rose and Searching For A Former Clarity. Five years ago, Grace came out as a transgender woman, backing up her conviction and determination with the release of Transgender Dysphoria Blues, the first release on her owned-and-operated Total Treble imprint. That attitude and vision was further manifested on that album’s follow-up, 2016’s Shape Shift With Me.

In this year’s APMAs issue, Grace told AP that “I look at it as a collective effort. When you’re trans and you’re still hidden about that, when you see other trans people, you feel like the universe is putting that for you to help push you on your way.” Yet as the current social climate has been more receptive and responsive to the LGBTQ community, Grace has been celebrated for giving this culture a forward-facing figurehead, defining and embracing gender/social politics to a generation that’s never been more aware and accepting. The indisputable fact that her uncompromising music prefers positive affirmation to market share cements Grace’s stature as a bona fide icon.

“Four years ago, I was here at the APMAs giving this exact same award to my hero Joan Jett. This is both surreal and incredible,” reflected Grace.

Grace also spoke about the award at the LGBTQ in Music Panel, “I did not get involved into punk rock for terms like icon … I'd like it to be reflective of an iconic scene.” said Grace.

Check out some tweets reacting to her truly amazing speech!

Got a little emotional during @LauraJaneGrace 's speech, thank you for being a warrior & icon ♥️ #APMAS #apmas2017

Laura Jane Grace's speech nearly brought me to tears omg. The most genuine soul this planet has to offer #APMAS

Watch Against Me!'s amazing performance below!

Catch Against Me! on tour this fall: