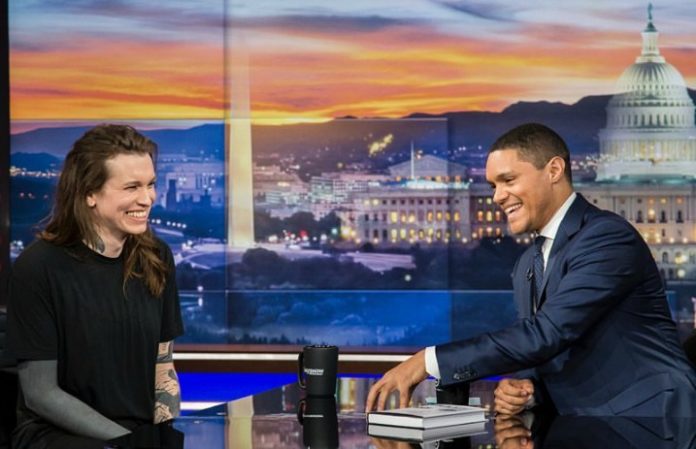 There, she discussed her memoir, Tranny: Confessions Of Punk Rock's Most Infamous Anarchist Sellout.

Not only does Grace address her new book, but she also talks on Against Me!'s fan reception after they went from an indie label to a major label.

“I understand it. I'm a music fan myself, and I've definitely had bands that, as they got bigger, I felt like my ownership of them was lost, especially with the scene my band came from—the D.I.Y. punk scene—that's staunchly anti-Capitalist,” Grace says.

On her book's title, Grace says: “As an artist, as a writer, words that have power are always going to be interesting to me. I'm going to want to explore them.”

On her personal transitioning experience, Grace says: “I didn't hear the word 'transgender' until I was 19 or 20, so I spent a good period of time in my life wondering: 'Am I schizophrenic?' or 'Did I have like twin souls living inside of me warring for control?'”

She continues on the lack of transgender understanding: “I say it all the time: I think really the problem is a lack of education. If you think back to school— what a joke sex ed was. There is no gender identity class—the difference between gender identity and sexual identity. It never was really explained to you. So if that wasn't explained by your parents, their parents or their parents, how can you expect most people to have an understanding of gender?”

Against Me! released their newest album, Shape Shift With Me, last September. They're getting ready to head out on tour with Green Day this Spring. Check out the dates below the interview.

Watch more: Laura Jane Grace on future Against Me!