Alexisonfire just dropped a cryptic teaser to their Facebook page and fans are freaking out. In a short glitchy video, an abandoned drugstore front appears in lime green with the words, “Familiar Drugs.”

In the comments, many fans are beginning to speculate what the teaser could mean.

Read more: Panic! At The Disco’s “death walk” may end due to inappropriate touching

According to a screenshot from a Facebook group called Post-Hardcore, the video teaser could be a promo for a forthcoming single called “Familiar Drugs.”  The comment says the release date for the potential song could be Feb. 15. 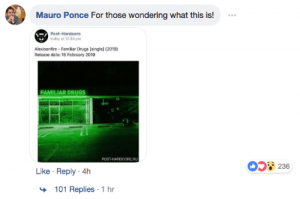 Check out the teaser trailer below.

However, as if dropping the glitchy video wasn’t enough, the band additionally changed their profile picture and cover photo to a solid black image.

According to Loudwire, Alexisonfire have toured together over recent years. However, if fans are correct about new music on the horizon, a new album would mean the first LP since 2009’s Old Crows / Young Cardinals. The band additionally put out an EP in 2009

Check out what fans are saying about the potential reuinion below.

Me if Alexisonfire actually do release a new single on February 15th pic.twitter.com/gKylgUoplq

Honestly man, I’ve had a sick life so far, I’ve far exceeded my dreams as a kid, but if Alexisonfire are bringing out new music I swear to god that’ll top it all.

alexisonfire is up to some shit folks

alexisonfire reforming is what the entire world needs atm

What do you think Alexisonfire are teasing? Sound off in the comments below.