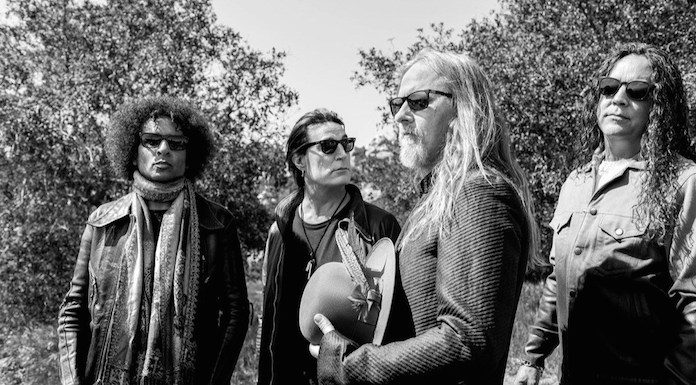 Alice in Chains have unveiled the fifth episode of their dark and creepy sci-fi thriller, Black Antenna—a series that is soundtracked by the band’s 2018 album Rainier Fog.

This series gets creepier and creepier with every episode.

The series circles around Alpha and his 21-year-old daughter Beta “who drive their beat-up truck across California in silence, speaking only telepathically.”

During their travels, Beta seduces men and steals from them to help Alpha build an antenna in hopes of sending a message to their people back home.

And of course, no sci-fi thriller is complete without somebody tracking the duo down in an attempt to kill them.

The series is directed by Adam Mason, who explains that working with Alice in Chains is a dream come true for him.

“This movie came out of nowhere for me,” Mason says. “As soon as I heard the album, the music and lyrics spoke to me on a profoundly personal level and the film and subject matter was born directly out of that.  I’ve always been a huge fan of Alice In Chains, and this has been a dream come true for me.”

Written by Mason and Paul Sloan, the series is produced by Elizabeth Mason and Oscar-winning screenwriter Nick Vallelonga.

Released as a series of 10 episodes (one for each track on the album), Black Antenna will total 90 minutes of sci-fi fun.

“We’ve always toyed with the idea of creating videos for every song on one of our albums. Not only did we do that for Rainier Fog, it got totally out of hand and we made a whole goddamn movie,” drummer Sean Kinney mentioned previously. “Everything that will be seen in the videos will be footage from Black Antenna to preface the complete film’s release.”

The fifth episode is set to the band’s track, “Drone.” You can watch the full episode below.

If you need to catch up on the previous four episodes, you can watch those here.

What do you think of Alice In Chains’ creepy sci-fi thriller? Sound off in the comments below!