With 20ninescene being alive and well, we’re always down for an added dose of nostalgia. All Time Low guitarist Jack Barakat delivered in a major way after taking a trip to his parents’ house.

Barakat found a jackpot of throwbacks left behind, and he did the only thing worthy of its contents: He went through it and posted it piece-by-piece on his Instagram story.

The trip down memory lane started with the guitarist revealing, “At my parents’ place. Going through my old high school folders. Follow me on this lovely journey.” A folder that reads “old All Time Low stuff” sits neatly below the text. 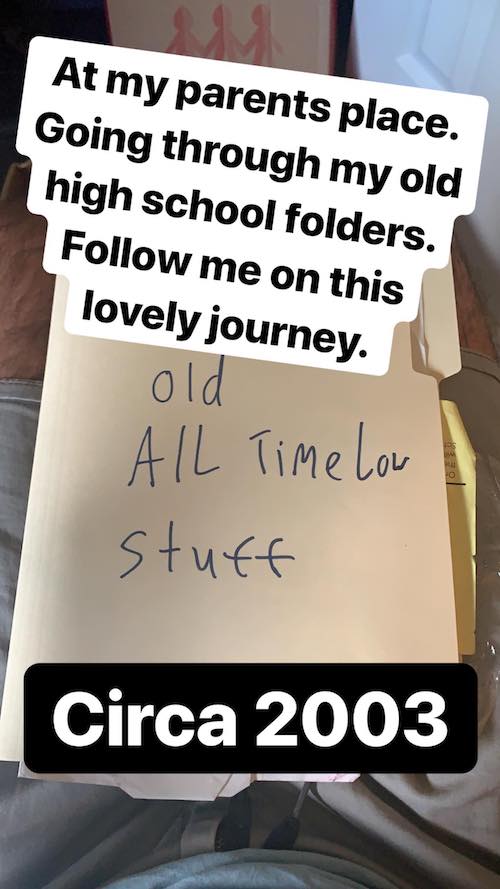 First up were two high school papers. The first, a report on legalizing gay marriage titled “I Now Pronounce You Man and Man?” The second report was, of course, on Harry Potter. 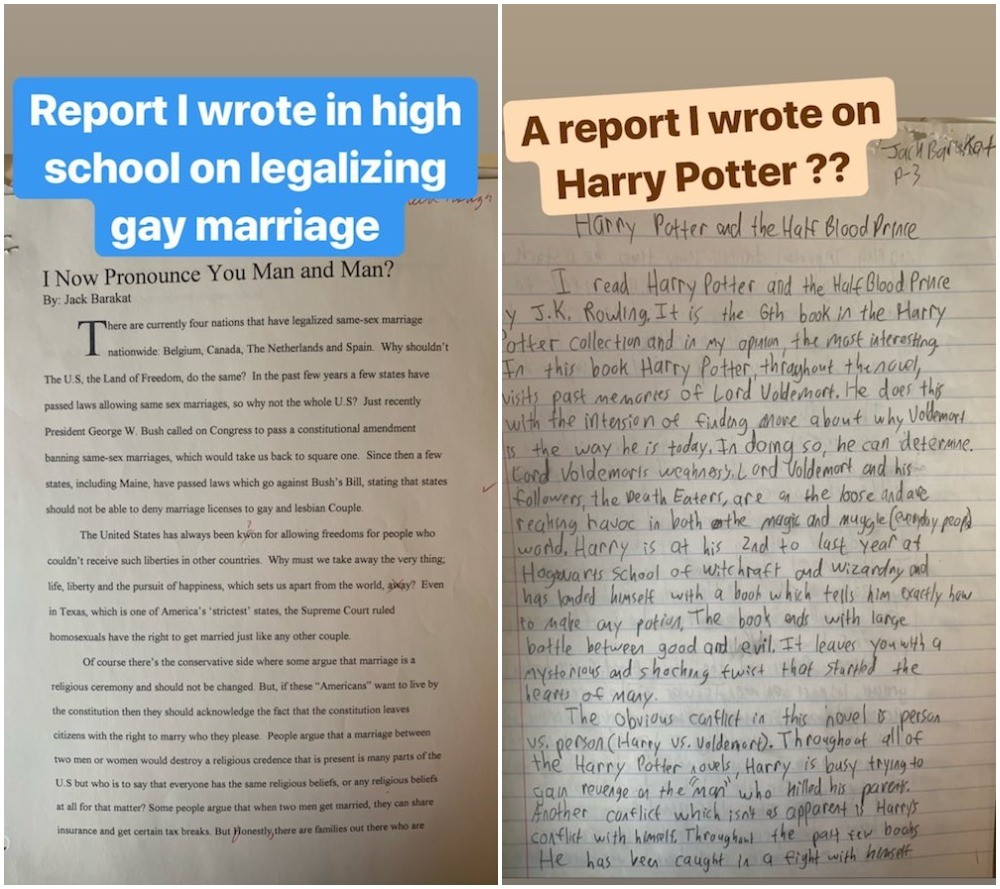 Next up, Barakat shared a college admission letter to their local Towson University. He also unearthed an old TI-83 Plus calaculator complete with an All Time Low sticker. 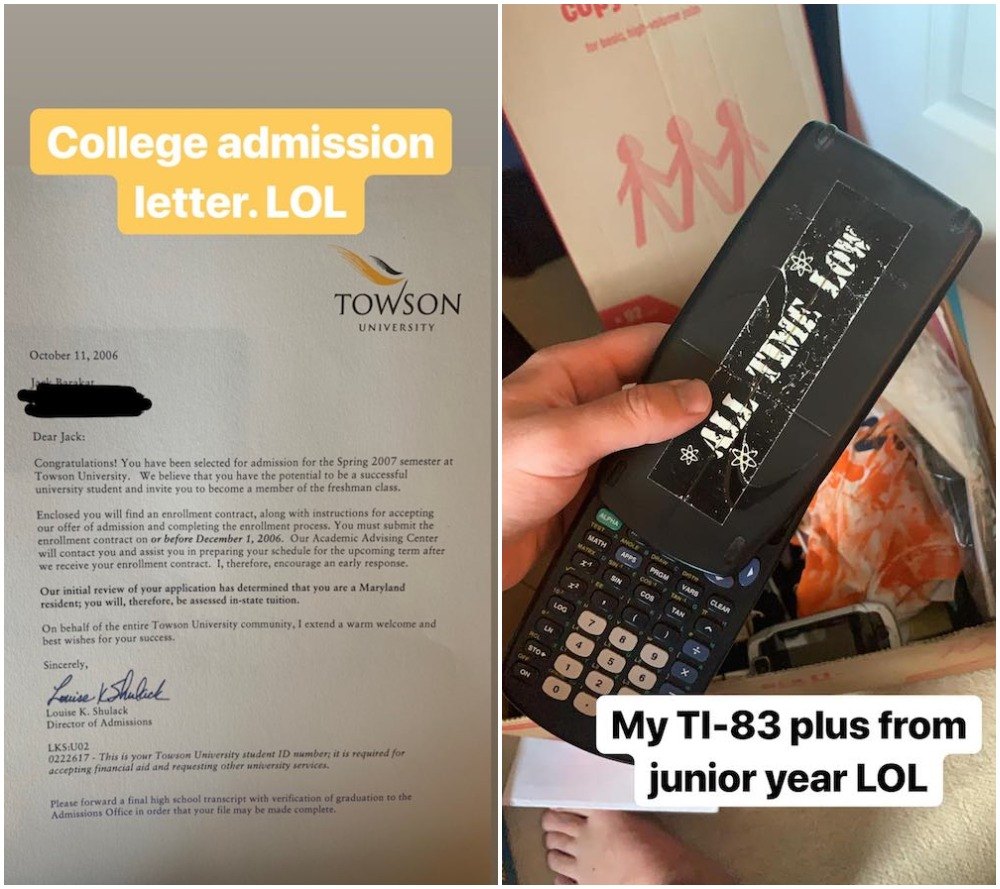 One of the most archaic and peak scene kids moments to come out of the box, however, goes to the T-Mobile sidekick. 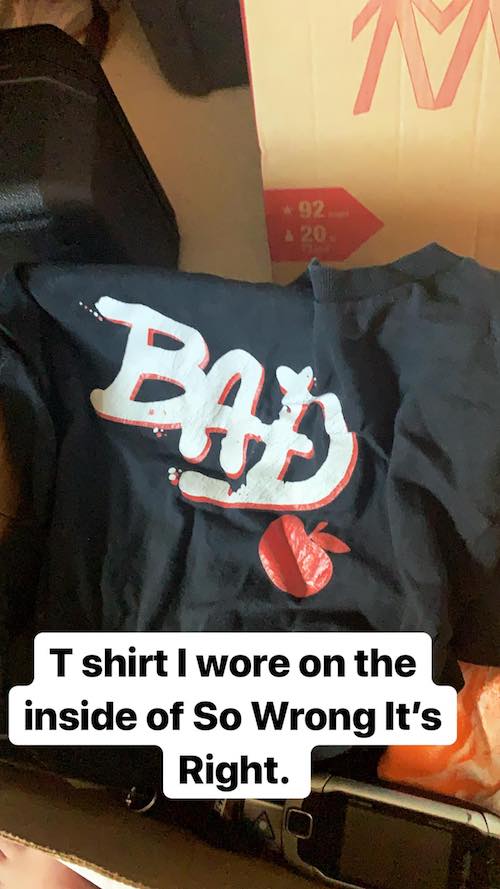 Like many, the guitarist still had a handful of old concert tickets. The Pop Disaster tour featuring blink-182 and Green Day with Saves The Day as support was first up. All Time Low were previously a blink-182 cover band with the foursome regularly talking about their influence.

In 2016, ATL opened for blink-182’s summer tour, and Barakat reflected on the major moment. In an essay, he shared the Pop Disaster tour was the first time he saw the band live, and it left such an impact on him with him citing it’s “the reason why [he] plays music.”

Barakat also shared tickets from a 2002 Good Charlotte gig and a 2003 the Startling Line show with the latter signed by frontman Kenny Vasoli. 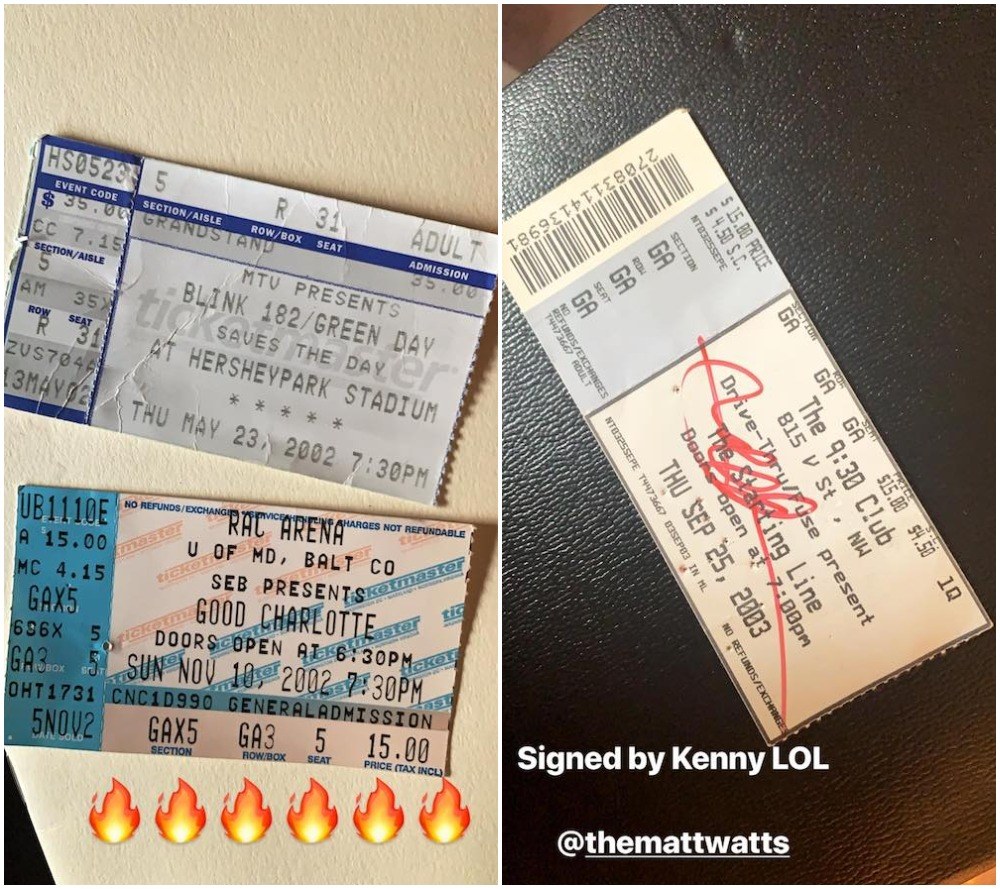 Another All Time Low throwback came in the form of practicing his signature. “In 9th grade, @jritz22 made me create a signature in case I ever ‘got famous,’” he wrote. “And this was the first time I wrote JB. Never changed it.” 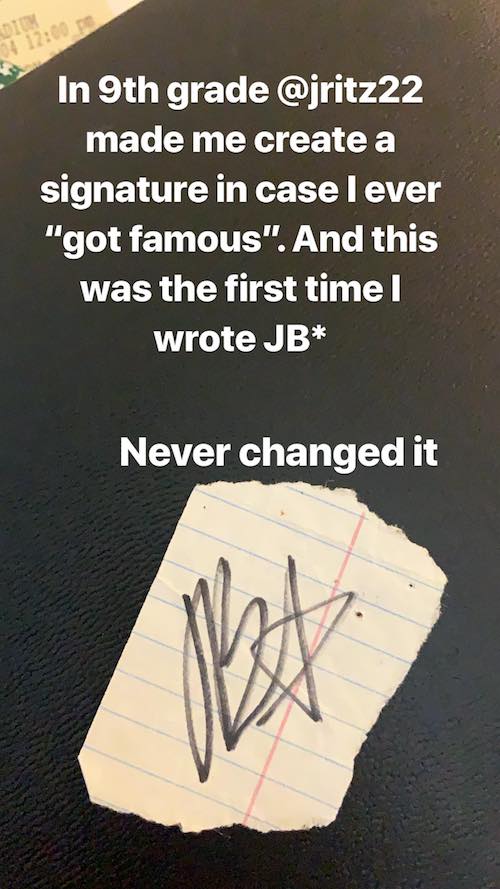 As if the tickets and the signature weren’t nosalgic enough, Barakat also held on to some old All Time Low show posters. One features the band’s 2003 headlining show and the other highlights a major support slot in 2004. The second poster shows the band opened for Armor For Sleep and Midtown at the Ottobar in Baltimore. 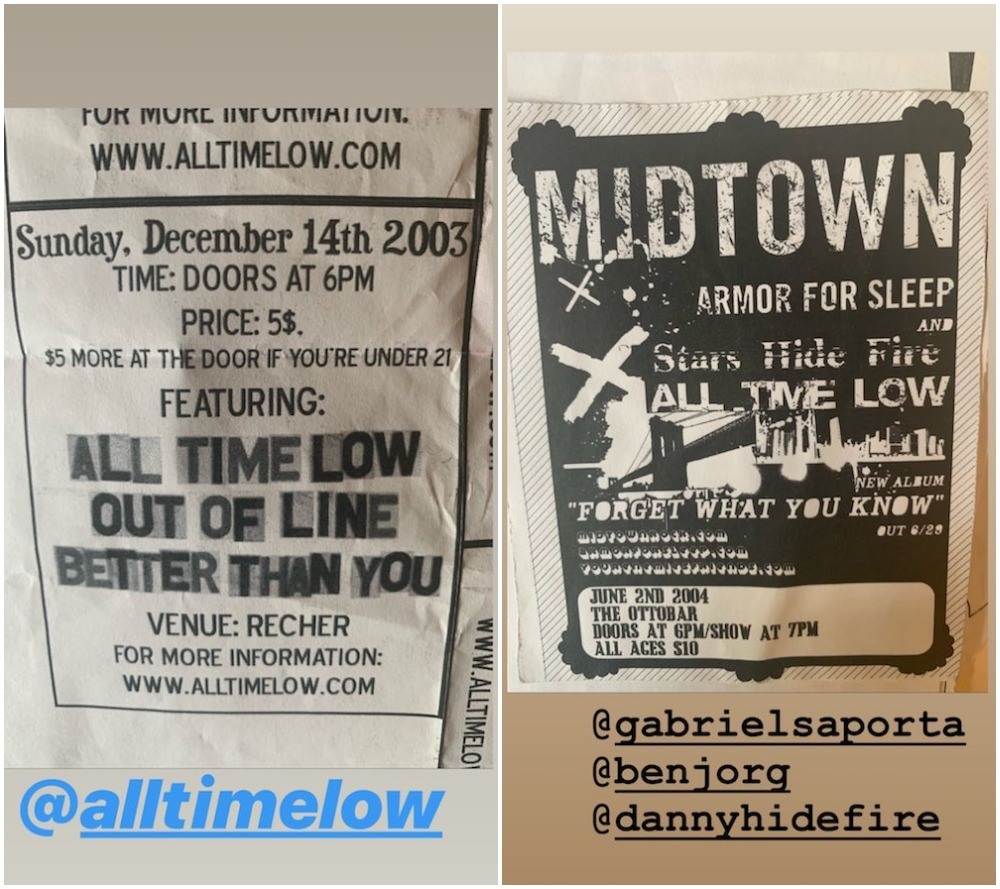 However, the throwbacks didn’t stop with just physical items. Barakat also started digging into some old photos of his bandmates. Among them were a pre-selfie selfie with Alex Gaskarth and what appears to be a clothing swap starring Gaskarth and Rian Dawson. 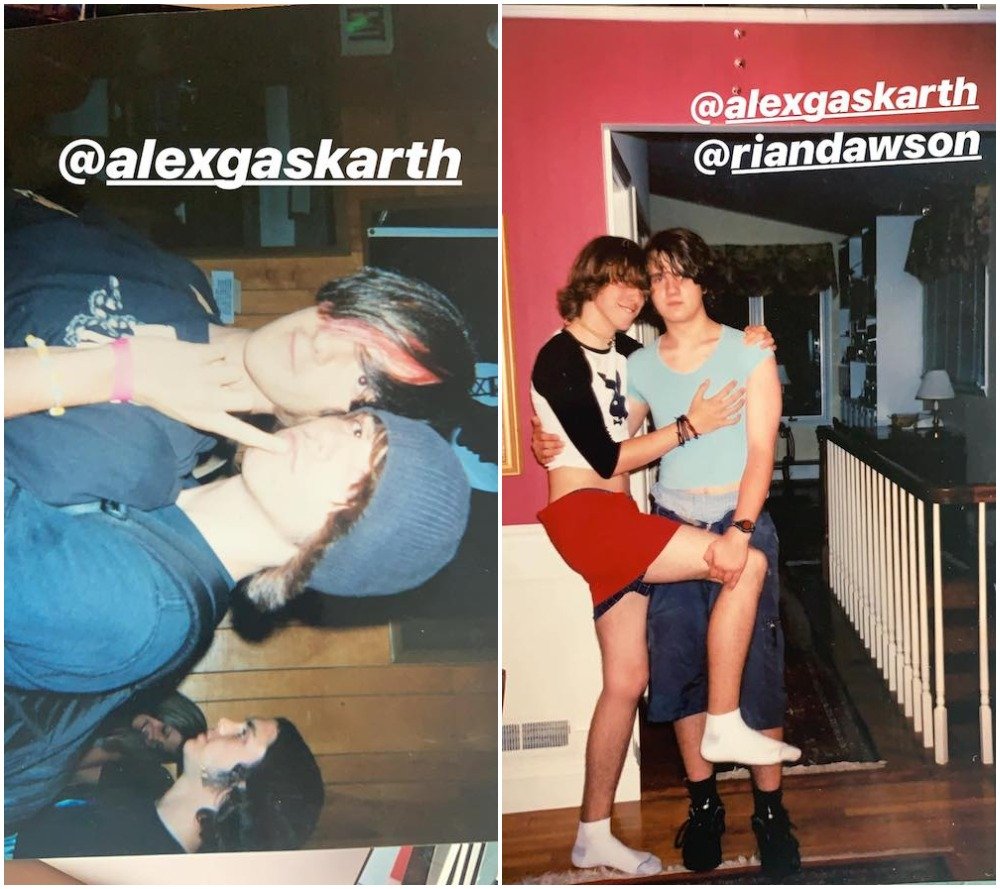 There were also some old rehearsal photos of Barakat, Gaskarth and Zack Merrick. 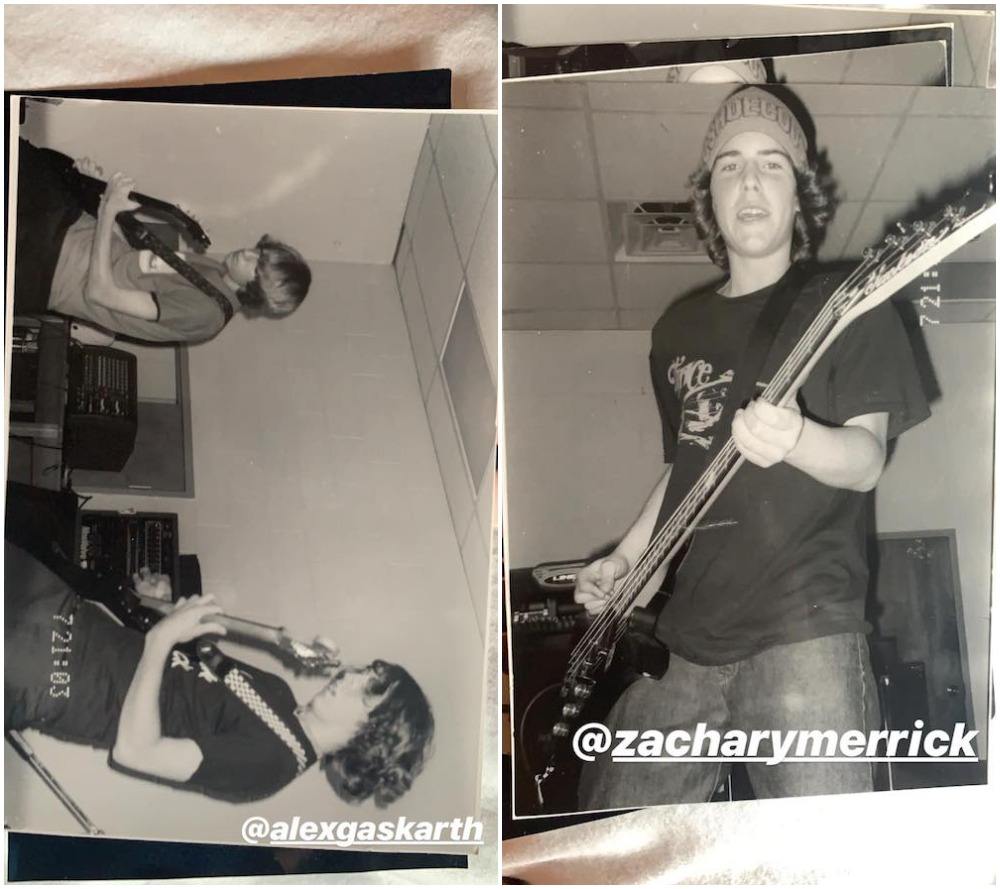 Barakat didn’t leave the major throwbacks to just his bandmates though. He shared a shot of himself playing an Anti-Flag sticker-ridden guitar and a school photo in a Rufio shirt. 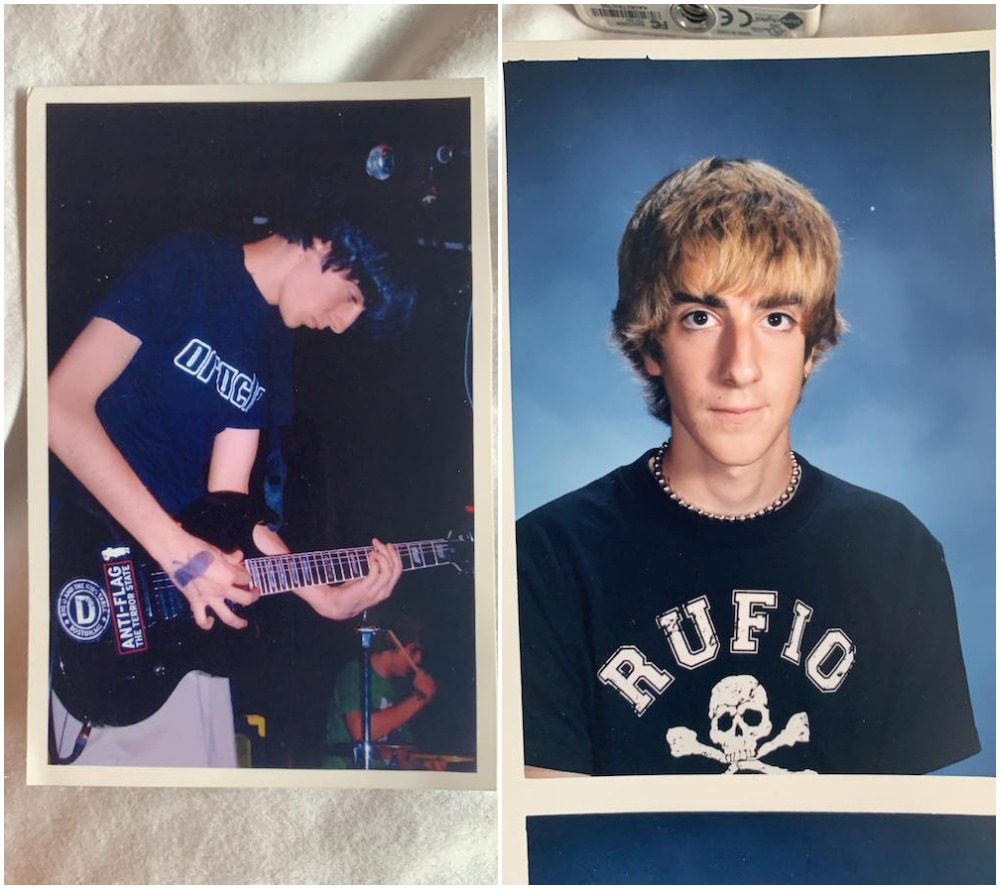 Barakat has been keeping busy with his new project WhoHurtYou, but the guitarist still has plenty going on with All Time Low.

The band were recently added to a rescheduled blink-182 date, joining Neck Deep as support. They also announced they’ll be re-recording Nothing Personal in honor of its 10-year anniversary.

While we’ll be waiting for the next batch of Everything Is Wine, the band have also been in the studio, sharing new track “Getaway Green” live for the first time at Slam Dunk.

What do you think of Jack Barakat and all his All Time Low throwbacks? Let us know in the comments below.