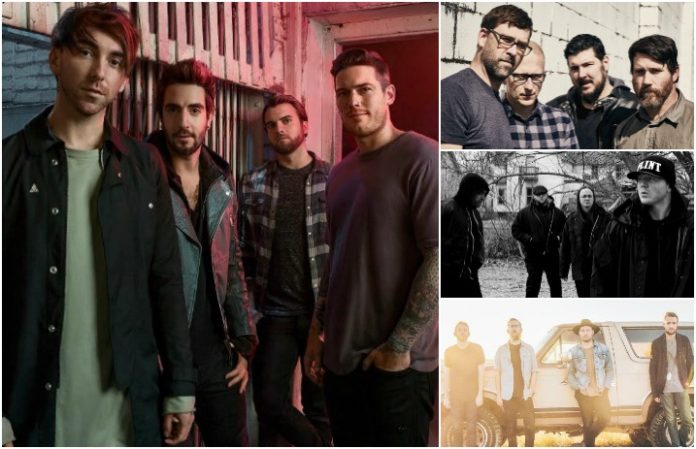 All Time Low add an additional So Wrong, It's Right 10th anniversary show, Hot Water Music premiere a new song, and King 810 announce some fall tour dates! Check out some of the news you might have missed today below.

All Time Low announce an additional show in celebration of the 10th anniversary of So Wrong, It's Right! A second night—Dec. 20—has been added to the previously announced Dec. 19 gig at New Jersey's Starland Ballroom.

King 810 are going on tour! Peep the band's upcoming tour dates down below, and you can check out a video trailer for the upcoming shows right here. Tickets for all the King 810 dates go on sale this Friday, Aug. 25, at 10 a.m. local time.

As previously reported by AP, Emarosa are going on tour this fall, the reported last juant behind their 131 album. Now, the group let loose a “reimagined” version of 131 track “Helpless” (listen to it above) along with the release of a special EP, 131 Reimagined, which is out on Sept. 15 from Hopeless Records.

English wunderkind King Krule drops the Frank Lebon-directed music video for “Czeck One”—check it out directly above! The track will be available on a limited edition 7” single coming out on Sept. 13—pre-order that rare wax here.

New Jersey indie-rockers Hodera premiere their new song “North Dakota” today over at Gold Flake Paint. The song will be a part of the band's new album, First Things First, out this October—pre-order the upcoming record here.

[Photo by: Bradley Allen]
British pop-punkers ROAM are heading out on a slew of European dates later on this year. See the band's complete itinerary down below. Don't miss out!

Backtrack break loose in the world

Long Island, New York-based hardcore kingpins Backtrack back it up with a new track called “Bad To My World.” The tight tune will soon be available on a new, 2-song flexi single from Bridge Nine Records—pre-order the thing right here.

Knocked Loose do some dates

Warped Tour champs Knocked Loose are also heading out on the road this fall for a handful of fresh tour dates. Check out the cities and dates directly below.

Take a listen to recent Pure Noise Records signees Bearings' “Petrichor” over at Punktastic. Be on the lookout for the band's brand new EP Nothing Here Is Permanent (or just pre-order it here)—the release drops on Sept. 8.

Massachusetts rockers (and safe show standard-bearers) Speedy Ortiz get live on a cut called “Indoor Soccer (Live At Shea Stadium).” It's from the new Exploding In Sound: Live At Shea Stadium compilation out Oct. 6. (via Billboard)

Small Circle, the new band from singer Marissa D'Elia and members of Sorority Noise, drop new song “Mornings” over at Stereogum. The track will be included on their debut full-length, Cyclical, out Sept. 8—pre-order it here.