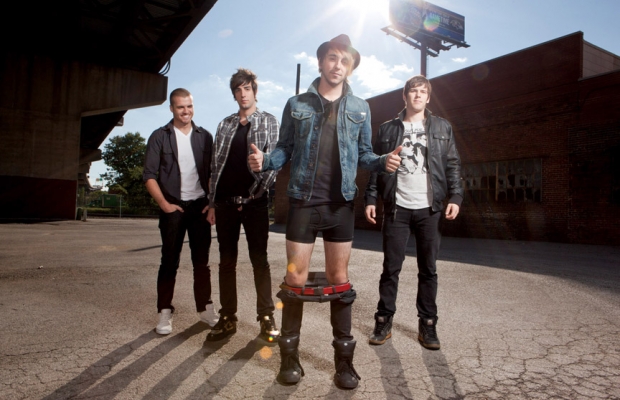 In a recent interview with The Gunz Show, All Time Low discussed the band's dealings with Interscope during Dirty Work, their new album and signing with a new label. Read several of the quotes below and check out the full interview here.

On Interscope and Dirty Work's release:

“It was a tough thing. I don’t want to badmouth anyone over there – for what they did they were really rad. It was a lot of bad timing, in a lot of ways. It’s kind of happening with all major labels at the moment. It was just one of those textbook situations where we signed, we had the record done, and then one thing led to another. First they had to gear up for a [Lady] Gaga release, so we got pushed back, and then they had like a whole firing and re-staffing moment, so we didn’t want to release without a team behind it, so it got pushed back again. It was a really frustrating moment for us, but it happens and it was completely out of our control, which was unfortunate, because I think that was a solid record and it definitely lost a bit of steam because of all the stuff Interscope was going through. So it was a bummer. But you live and you learn, and it’s one of those things that I don’t think affected us in a way that’s going to drag us down too much. We learn what we like and we learn what we don’t like, and we know what to avoid now.”

On the new album:

“We are done with the record, so it’s being mixed over the next couple weeks by Neal Avron (Fall Out Boy, Weezer, New Found Glory). He’s going to be making the record sound amazing. He dropped everything and mixed “The Reckless and the Brave” for us last minute, just so we could get something out before Warped Tour. We felt like that track sums up the album in a really good way.”

“It’s for sure a progression, but there are elements of what we used to do sprinkled through. Like I said before, this time around I tried to get rid of the idea of using genre influences and time period influences like I have in the past.”

“It definitely has some pop on there – I’d say it’s a pop rock record overall.”

“There is some disdain and a little bit of bitterness in some of the lyrics, but at the same time there’s a lot of resolution and a lot of resolve. Powering through the bullshit and trying to fix the situation – that’s always kind of what this band’s been about. It’s not about dwelling on the negative, it’s more about pushing through and finding the good in the shit that does happen to you.”