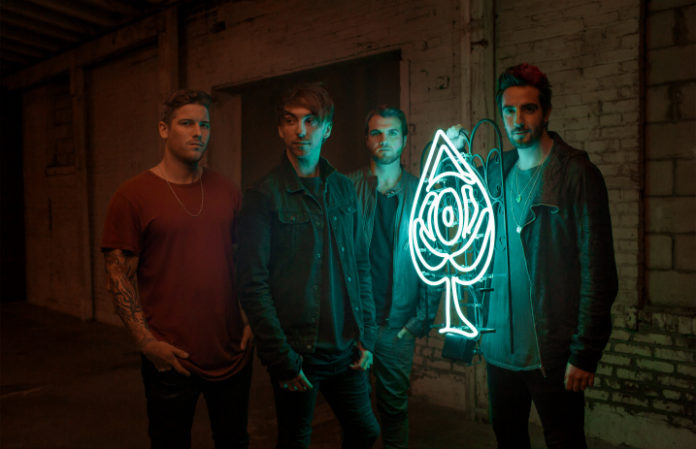 All Time Low have just released a new song, “Dirty Laundry,” and announced their signing to Fueled By Ramen. We chatted with frontman Alex Gaskarth about the synthy new direction of the song, signing to one of their favorite labels and what’s next for All Time Low.

It’s obvious from the song that you guys are taking a few bold steps in a different direction. What inspired that?
I think one of the big things as we were working on the record was just pushing ourselves forward. When we put out Don't Panic we hit the reset button on the band, and we started looking at Don't Panic as if it was our first record out of the gate as a more realized version of All Time Low. Then [there was] Future Hearts, and that felt like we started pushing the envelope forward and trying to expand the sound and grow. “Dirty Laundry” is a continuation of that. It's taking the idea from the last album and continuing to push it forward and explore new things.

One of the things with that we wanted to explore [w[was]ome darker tones, and I think “Dirty Laundry” got to try out some different moods and different feelings. [I[It talks]bout the guilty conscience and the mistakes that you've made and coming to terms with those and wearing them as badges. It was a really fun concept to explore and it really became one of the cornerstones of the album. We wrote it right in the middle of writing the whole record and it shaped the rest of the album. I think there's a lot of reflection on this record. I think the songs speak to that. It continues to go down that road, for sure.

We always like to keep things hopeful, and that's become kind of a staple in All Time Low—having a positive take [i[in our]ecords. But I think we definitely go a little bit darker than we ever have, lyrically and content-wise, which is fun because it can be therapeutic. It was tying some of those stories [t[together]/p>

Was this a track you wrote during touring or were you able to take some time off?
We finally did take some real time to ourselves to reflect on everything and to figure out how we wanted to make this record and what we wanted to write about. We didn't have any deadlines, we didn't have any due dates to turn anything in. I feel like that goes a really long way in the creative process. It can be helpful sometimes to have the deadlines and things because you don't linger, but at the same time we had plenty of time to do a lot of reflecting and soul-searching. We went up to Big Bear and Palm Springs [C[California]and stayed on ranches and locked ourselves away for weeks at a time. Basically all we did was eat, sleep and breathe music. That was really fun because we haven't done anything like that in a really long time. So that alone was really constructive and helpful for shaping the record that we ended up with. “Dirty Laundry” kinda came in the middle of that—it was actually while we were at the ranch in Palm Springs, and we were working on four songs that day at the same time. We took a departure and the first thing that happened was the opening riff for the song. We laid that in and trapped it real quick and it became this really neat soundbed and [w[we]uilt on it from there. There was a lot of indirect ’80s influence on this album, and we had a lot of fun with analog keyboards.

Obviously the whole band contributes and writes together, but you're known for being the key lyricist. If this is going in a little bit of a darker direction, is there anything you do to get in the zone creatively and think in that mode?
For the most part, I think it tends to come naturally for me. That's just where I was. Not to say that I was in a dark place per se, but I was reflecting more on my demons this time around, and that's something that I don't speak to often. And I think it [h[has]ade for a really cool writing experience and the record really shows that. Sometimes getting that stuff off your chest, however you do it, goes a long way.

You’ve also made the big move over to Fueled By Ramen. How did that come about?
It's pretty crazy, actually, because the first label we ever showcased for was Fueled By Ramen when they were down in Florida, so signing with them now was 10 or 11 years in the making. What we're really grateful [f[for]s they're such a good family. We've always loved Fueled By Ramen, we've always been fans of the bands on the label. After our last record, we were unsigned and we needed a new label. It was the perfect opportunity to partner up with a team that we had been fans of for a really long time. They really let us be who we want to be. There was no one there trying to shape us or guide us or direct us where to go from here. It's kind of like, “Look, you guys already know what you’re doing. Let us help you, let us facilitate that.” To me, that's a sign of a great partnership.

So what’s next for you guys?
From where we are now, it's exciting because we've been flying under the radar for a little while, and I don't even necessarily know that people are expecting new music. People know that something's bubbling, but I actually think people are gonna be really shocked when they realize that there's a single and a video and a new label! It's exciting times, I'm pumped. So I'm really excited to fire back out. I'm really looking forward to it. alt