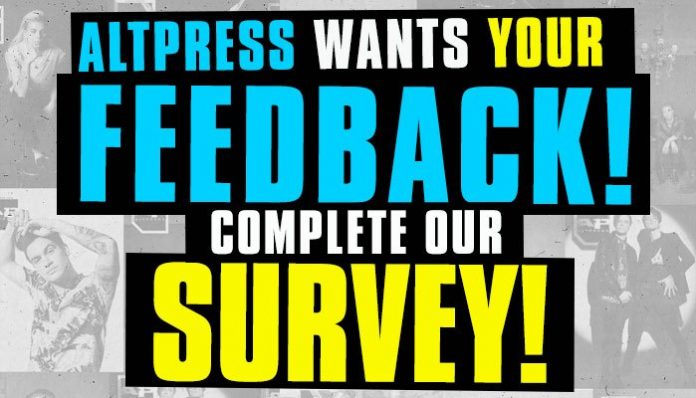 Alternative Press magazine wants your feedback! Complete our survey for the chance to win a prize pack from AltPress, Rise Records and Audio-Technica.

Enter by Nov. 22 to have your opinion count!

Read more: 25 music moments that made us thankful 2019 turned into 20ninescene

One (1) Grand prize winner will receive:

Two (2) Runners up will receive:

More on Rise Records and Audio-Technica

Audio-Technica was established in 1962, delivering nearly 60 years of audio equipment. The company specializes in microphones, headphones, wireless systems, mixers and electronic products for both home and professional use. You can learn more and check out their products here.

Rise Records has a longstanding within the alternative scene, having been founded in 1991 by Craig Ericson. They have had a plethora of noteworthy releases from Attack Attack!, Breathe Carolina, the Color Morale, the Devil Wears Prada, Emarosa, From First To Last, Further Seems Forever, Hands Like Houses, I Can Make a Mess Like Nobody’s Business, Isles & Glaciers, Jonny Craig, Man Overboard, Miss May I, the Plot In You, Polar Bear Club, PVRIS, Silverstein, Sleeping With Sirens, SWMRS (as Emily’s Army), Teenage Bottlerocket, Woe, Is Me and more.

You can get more information on Rise Records here and check out their current roster below.