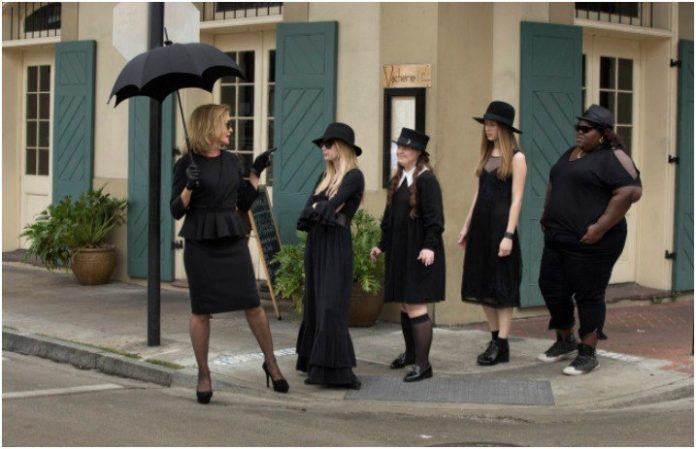 Details of American Horror Story season eight have been swirling around the internet, but it looks like news is emerging for the show’s ninth season as well.

There’s been talk of the American Horror Story crossover series for some time now, and it looks like fans of the series are finally getting a sneak peek of what the major crossover season will be about.

In an interview with E! News, series creator Ryan Murphy teased the season, and the details have us freaking out.

According to Murphy, he’s been working on the crossover season for years, and if he does manage make it happen, it will occur during the series’ ninth season.

Yeah, we wouldn’t be opposed to seeing season nine have all of our faves from seasons past.

This isn’t the first time Murphy has spoke about the mysterious crossover season. As reported by Teen Vogue, the crossover is slated to be a blend of both Murder House (season one) and Coven (season three).

While we’re beyond excited to finally get hints at what we’re hoping to be a major crossover season, we can’t forget about the show’s upcoming eighth season. Murphy was a part of the Television Critics Associations’ press tour and while there, he teased a few details of the show’s upcoming season.

“I pitched it to [FX boss] John Landgraf today right after his TCA panel, and he loved it, but he’s asked me not to say what it is,” said Murphy. “I told him and he fell out of his chair with joy. I think people will like it, it’s different from what we’ve done before, but I always try and do the opposite of what I’ve done on that show.”

Murphy may not have been able to discuss the show's actual theme, he did provide a hint at things to come.

“All I’ll say about it is I want to go to the future—still topical, but the future, which I’ve never done.”

The vague details haven’t stopped fans from guessing the show’s theme. Many twitter users are guessing the theme is “Radioactive” and if their correct, we’re pretty excited.