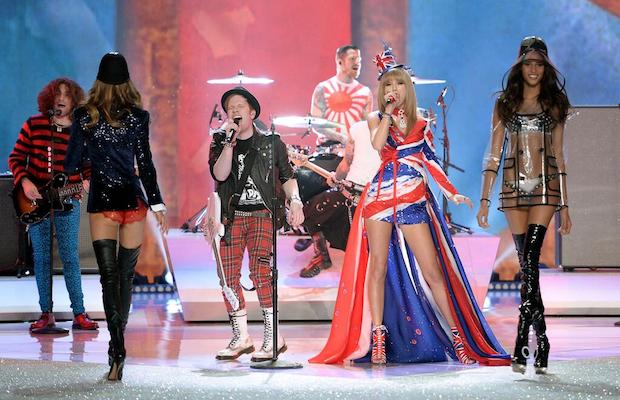 The one time he bothered to wear a shirt…

Fall Out Boy drummer Andy Hurley became the unintentional subject of controversy last week, when he was outfitted with a shirt bearing the Rising Sun, a symbol which various Asian cultures find offensive, for the band's Victoria's Secret Fashion Show appearance.

Hurley, who did not pick out his own wardrobe and was unaware of the symbol's controversial connotations, was alerted by fans on Twitter, and subsequently issued a statement over the weekend with the assistance of an anthropologist, Dr. Jennifer Raff.

Check out the apology, which includes a broader cultural explanation of the Rising Sun symbol and its meaning, in full below:

Cultural sensitivity is fashionable, too. –by Andy Hurley and Jennifer Raff

When Andy Hurley performed with Fall Out Boy for the 2013 Victoria’s Secret fashion show on November 13th, he was given a costume to wear that included a shirt with the Rising Sun on it.

The Rising Sun symbol, used by the Imperial Japanese Army during World War II, has come to represent horrors of wartime aggression (such as the Nanking Massacre) to many, particularly South Koreans and Chinese people.

The Rising Sun symbol is horribly offensive to descendants of people affected by these events, much like the Nazi Hakenkreuzflagge or the Confederate flag. Yet unlike those symbols, it continues to be used widely.

Many people simply don’t understand the connotations of this symbol. But after he was made aware of it, Andy and I felt that this incident would provide a good opportunity to heighten awareness of its cultural context. Here are his thoughts.

I had the opportunity to play the Victoria’s Secret fashion show, which was such an amazing thing to be a part of. The outfits we wore were necessarily styled to fit in with our part of the show, which emphasized a British invasion look…so we were styled in a Sex Pistols-style British punk attire. I had no problem with this, as the purview of the fashion world is way outside of my comfort zone. Unfortunately, the shirt that was chosen for me was the image of the rising sun and was an extremely insensitive choice. I was totally ignorant of its meaning, and that is my fault.

I should have known better and upon reading my @replies on my twitter feed today, I saw that it upset some fans. I appreciate that they brought it to my attention, as I never want to offend any of our fans or anyone period. I must stress that none of the people who brought this to my attention did so in a mean or negative way. It was a very nice and constructive way that they informed me of what the shirt meant and how it was offensive. Being held accountable for the choices and mistakes I make is a very important thing to me. It’s an important thing for everyone to be willing to analyze the things they do and take part in, and to admit the times that mistakes are made. This was definitely one of those times for me.

A horrible feeling of letting my fans down as well as my own ethical standards led me to write an apology on my twitter, as well as this more in-depth explanation in conjunction with one of my best friends, an anthropologist, Dr. Jennifer Raff.

I immediately went to her upon finding out that some fans were offended to get a deeper understanding of the history and meaning of the image that was on the shirt I wore. This was something we came up with to hopefully inform more people on this situation.

We think that it’s important to be sensitive to the meanings of symbols, and not to simply dismiss reactions to their misuse as “PC”. Whether it be cultural appropriation or the uncritical use of symbols, we urge everyone to think more carefully in the future about the symbols they adopt.”

Fall Out Boy's Victoria's Secret Fashion Show performance, which includes a collaboration with Taylor Swift, will air Dec. 10 on at 10 p.m. EST on CBS.

The band will embark on a radio-sponsored U.S. holiday run next month, before taking their Save Rock And Roll arena tour to Mexico, Japan, and Europe.