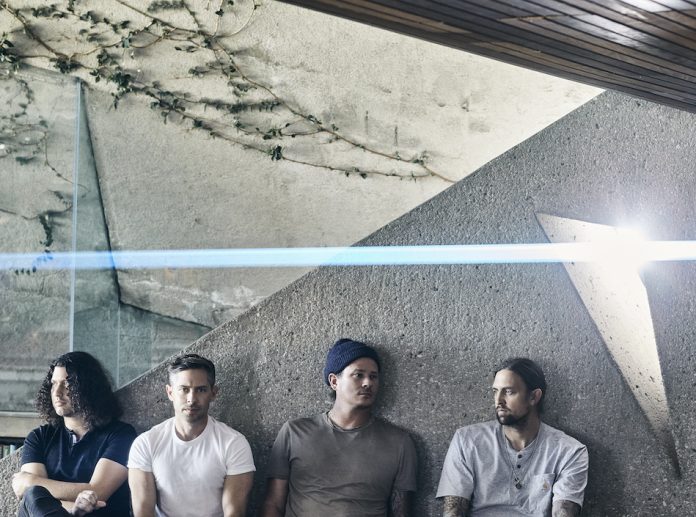 Angels & Airwaves are back with their newest track since last year’s single “All That’s Left Is Love.” The latest release, “Euphoria,” is a third-person anthem about an individual learning to let go of emotional baggage after a troubled relationship.

Angels & Airwaves’ have been pairing with high-energy, passionate videos since the release of “the Adventure” off their debut album We Don’t Need to Whisper. “Euphoria” matches that same energy and depth. The conceptualized video features an animated Tom DeLonge singing, “She never ran ‘cause she never really knew how.”

Along the way, the video goes back-and-forth between the band playing energetically in a fluorescent room and a melancholy scene of a woman in lingerie freeing herself from a troubled romance. The 2019 video “Kiss and Tell” also begins with a woman in lingerie trying to gain the attention of an apparently disinterested DeLonge, who appears dead by the end of the video. The band prides itself on making deep, deliberate concept albums, so it makes you wonder if they’re connected.

“Euphoria” certainly has the over-the-top crescendo reminiscent of U2, but the sound is distinctly AVA. This is just the first full song to drop in the midst of the band’s secretive Project Dreamland, but the band released teasers for it in August 2020.

Subscribers to the Angels & Airwaves’ Empire Club enjoyed first access to the song, as they will with any subsequent releases. Fans have three membership options, but they can only view early releases if they’re subscribed to one of the top two. The premium and second-tier choices are called “The Adventure” and “Lifeline,” respectively. Further, the membership also offers the opportunity to give the band feedback on their most recent releases.

“I need you guys to tell me if we’re doing a good job,” DeLonge said in a Twitter video. “Is the music cool? Do I look skinnier? You know, the things that really matter.”

Read more: Twenty One Pilots release “Saturday” ahead of “Scaled And Icy”–WATCH

New music/show announcements are closer than you think. Want 1st access? Empire Club is now open! Our official, fan community. A place to connect with each other, us, first access tickets, VIP, listens and looks, exclusive merch and more. Say hello at https://t.co/tQjzbFGYdw pic.twitter.com/rUDnA1HZjG

DeLonge is notoriously transparent about what he expects and isn’t shy with talking about past projects he’s worked in. In a 2019 interview with the band’s fan page, AVA Movement, he said the newest AVA record sounds the way he imagines his former band Blink-182 would sound like in the future.

“What that means to me isn’t necessarily how fast the songs are or what the lyrics are saying,” DeLonge explains. “It’s the way you write punk music. The way you bring in electronic elements, synthesizers. The way you bring in crescendos. There are things that create dynamics. A lot of punk rock music is start this way, end this way, so it’s this very one sound-one-tone. Meanwhile, Angels and Airwaves ramps you up, brings you down, explodes, and ramps you up again.”

Awhile back Tom said the new @AVABandOfficial record would sound like his vision for blink-182's future. Here's how he explained it…

“Euphoria” starts with a heavy synth intro and leads into a heavy-hitting powerhouse of dynamic guitars. DeLonge experiments with electronic music considerably, and last October had a feature on EDM group Illenium‘s “Paper Thin.”

In recent years, the band have linked releases to multimedia projects. For instance, their 2014 album The Dream Walker was accompanied by a full-length feature film, a novel by Suzanne Young and a comic book written by DeLonge under the pseudonym “Poet Anderson.” You can watch the award-winning video on the Angels and Airwaves Youtube channel.

Keeping up with tradition, fans have been met with cryptic images of “classified documents” via Twitter over recent weeks. It’s no secret that DeLonge is a bit obsessed with the paranormal, having founded the UFO-based media company To The Stars. He told Rolling Stone in 2016 that Angels & Airwaves is also part of the brand. AVA’s been described as “space rock,” which makes one question if extraterrestrials are a theme in the newest release.

You can read an exclusive interview with DeLonge and watch Angels & Airwaves’ video for “Euphoria” below.

“Euphoria” seems to be about someone learning how to be themselves for the first time. Where did the inspiration for this self-realization anthem come from?

“Euphoria” is actually about the emotional baggage we bring to every relationship we have going forward. Something that is a spark, or an edge can be the sign of damage to the heart when younger. We are all responsible for our own emotional growth, and if we don’t learn the lessons, we will contaminate everything we do after.

Fans have been eagerly posting on Twitter about your new album and mysterious Project Dreamland for a while now. What can they expect from the new record?

This album is the most diverse and eclectic yet for my career. I’d ask fans to listen and search for elements from each of my past bands that are all incorporated into this one art piece.

Fans have shared images on social media showing “confidential” letters related to Project Dreamland. What kind of clues are you authorized to give regarding their content?

Fans should keep an eye out as these transmissions and communications will continue to give clues to major pieces of the album campaign.

What do you think of Angel & Airwaves’ “Euphoria”? Let us know in the comments below.