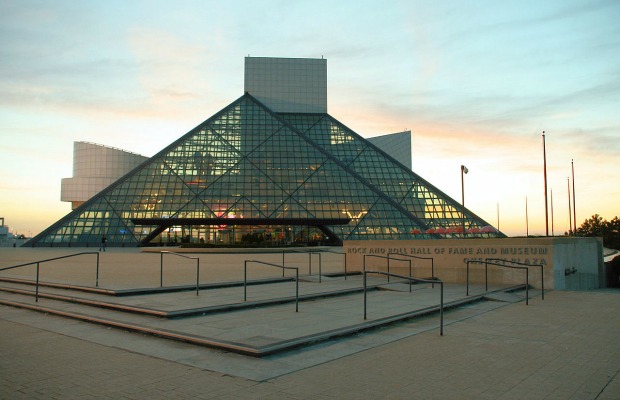 Now in its 30th year, Alternative Press Magazine continues to be on the forefront of discovering new artists, breaking news and reporting on the latest trends in music and youth culture. Since its early days as a pasted-up fanzine in the mid-’80s, Alternative Press has been revered as one of the largest music magazines in the world, all while being independently owned and operated. Renowned internationally as the publication that ultimately broke groups such as Nirvana, Weezer, Smashing Pumpkins, Radiohead, Foo Fighters, Fall Out Boy, Nine Inch Nails, Slipknot, Marilyn Manson and others, it’s no surprise that Alternative Press Magazine is recognized as the #1 youth music magazine in the world.

This month, Alternative Press Magazine celebrates 30 years of bringing fans the hottest artists and cultural trends upfront with their the announcement of a special dedicated exhibit within the legendary Rock And Roll Hall Of Fame And Museum, saluting the incredible story of this wonderful, independently published music magazine.

Alternative Press founder and CEO Mike Shea offers his thoughts on this history of his magazine that he started in his childhood bedroom, and its transition into the great entertainment periodical it has become. “In May of 1985, I had asked a couple of skater kids and a few music fans to whip together a bunch of reviews of new and classic punk records along with a few sentences about whatever cool shows they had gone to recently for this new fanzine I had been piecing together out of my bedroom. I had been editor of the high school newspaper so I knew how to do layout, photos, letterpress and write. I went to Morse Graphics and bought a bunch of graph paper and sketched out the first issue like I had the school newspaper during my Senior year. The most important story to me that was being written for the first issue was why the Smiths weren't coming to Cleveland on their 1985 tour of America—I was super-pissed about that. So I wrote the piece. I called the local Warner Brothers Records office (the band were on Sire) to try and get to the answer of the cause of this travesty and the suggestion from the label rep was to ‘probably write Sire Records in New York City about it but it probably won't do any good anyway.’ (It didn't.)”

Shea adds, “To think that 30 years later, this little fanzine that we pasted together with spray mount and Xacto knives could still be around and continue to be a resource for the young music fans of today, just like it had been back in the 80's when we started, is both astounding, but also extremely humbling. We had no idea that we would have this sort of lasting impression on music fans here in the US (and worldwide for that matter.) The first US magazine to have Nine Inch Nails to Marilyn Manson to Korn to Radiohead to Oasis to Fall Out Boy to Paramore to Smashing Pumpkins to Blink 182 to Rage Against The Machine to Foo Fighters to All Time Low—how we did all that still blows me away.”

“30 years, 325 issues, thousands and thousands of pages printed and just as many artists from large mega-acts to unsigned upstarts, all written about and photographed for our pages: The AP brand has become something so big and with such a lasting legacy, all I can do is literally sit back and be proud of all of hard work and long hours that all of the AP lifers, past and present, have contributed to make Alternative Press what it is today.”

Alternative Press Editor In Chief Jason Pettigrew adds, “I speak to a lot of music fans, listeners of all ages and creeds who either pledge varying degrees of allegiance toward assorted subgenres or are completely immersed in playlist culture where the ‘guilty pleasure’ simply doesn't exist. All of them are quick to acknowledge AP as being a flashpoint for their musical enlightenment at some point in their lives. I like to think we've played a part in helping successive generations discover their own culture, when other outlets simply didn't care unless they could exploit it. I'm proud to be a part of what Mike Shea set out to do all those years ago. And, like any other guy who spends most of his weekends in record stores, I can't wait to hear what the future sounds like.”

Legendary recording artist, Rock And Roll Hall Of Famer and 2014 APMAs performer Joan Jett offers her thoughts about the 30th anniversary, “Thank you to Alternative Press Magazine and Mike Shea for championing alternative music for 30 years. Congratulations on this incredible milestone and I’m looking forward to seeing what they come up with in the next 30!”

To celebrate the 30th anniversary, ‘stache media and Alternative Press have partnered together to release a limited edition 30th Anniversary Alternative Press Fan Pack,available only at Best Buy. Available June 28th, the fan pack takes a look back at the last 30 years of Alternative Press and looks forward to the next 30 bands on the rise. The piece includes a “Pride of 85” bandana, limited edition poster and a 30-track sampler spotlighting artists like We Came As Romans, State Champs, Real Friends, As It Is, Beartooth and more. Link to purchase now: www.altpress.com/AP30FanPack

On the eve of this year’s APMAs (July 21), Alternative Press Magazine will be honored by the Rock And Roll Hall Of Fame And Museum with the unveiling of a special new exhibit, Never Give Up: Alternative Press Magazine At 30, presented by Roadrunner Records, Fueled By Ramen and Jakprints. To commemorate the milestone and Alternative Press’ unparalleled 30 years of championing underground music and breaking some of the biggest names into the mainstream, the exhibit will feature a history of the magazine, its best stories and photos, and how the publication contributed a much-needed voice to the underground over the years. Special artifacts that will be on display include contact sheets from various photo shoots, cover art from hundreds of issues, letters to Alternative Press Magazine from fans and celebrities, early art work, video interviews with musicians featured over the years, footage from prior award shows and Vans Warped Tours, and more. The exhibit opening will kick-off with a special Sonic Session featuring Danish alt-rock group New Politics and one of AP’s “100 Bands You Need to Know In 2015,” Vinyl Theatre. For more information visit rockhall.com. Entry to the exhibit is just $5.50.

Greg Harris, CEO and President of the Rock And Roll Hall Of Fame & Museum says,“It’s a banner year for Alternative Press, the Rock Hall and Cleveland! As the Museum turns 20 and AP turns 30, it’s only fitting that these two Cleveland icons have a joint celebration. We are excited to exhibit the rich history of the influential magazine in our Museum, host New Politics for a Sonic Sessions concert, and support the 2nd annual Alternative Press Music Awards.”

The Alternative Press brand has been successfully extended through live events, beginning with the launch of the AP Tour and the company's inaugural Alternative Press Music Awards show, which trended No. 1 worldwide on Twitter and Facebook for over 24 hours.

The highly-successful AP Tour —which has featured diverse groups such as Circa Survive, All Time Low, 30H!3, Bring Me The Horizon, Black Veil Brides, Four Year Strong and Miss May I—saw its ninth run in 2012. (Fun fact: Sonny Moore took part in his first national solo run on the AP Tour in 2008, which marked his transition from From First To Last into his Skrillex years.) The tenth AP Tour is set to launch this fall, with the lineup set to be announced at this year’s APMAs.

This year’s APMAs will take place on July 22nd 2015 at the Quicken Loans Arena and will be hosted by Alex Gaskarth and Jack Barakat of Billboard chart-toppers and five-time AP cover stars All Time Low. Performances from Weezer, Sum 41, Simple Plan, Black Veil Brides, Panic! At The Disco, Taking Back Sunday, Corey Taylor of Slipknot & Stone Sour, Motionless In White, a special performance from New Found Glory featuring Hayley Williams, Halestorm, Tyler Carter of Issues, and (last but not least)… All Time Low! The world-renowned Contemporary Youth Orchestra will also be returning to the APMAs to accompany many of the evening’s performances and event proceedings. For tickets, voting and information, visit www.altpress.com/apmas.