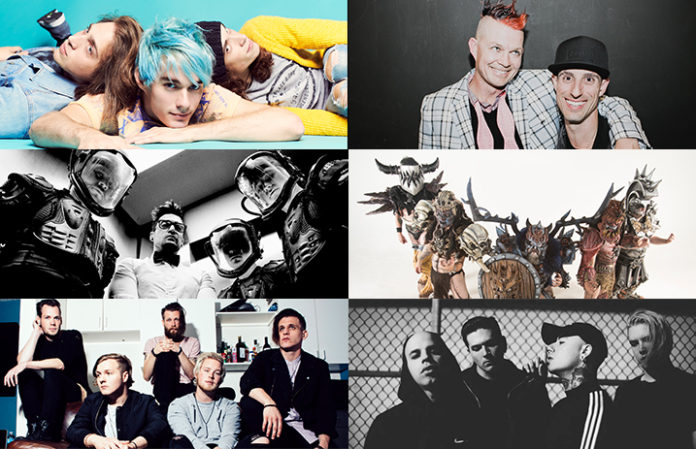 Two more exciting acts have been announced for the 2017 Journeys Alternative Press Music Awards adding to an already diverse lineup.

Waterparks’ energetic frontman Awsten Knight made his debut on the APMAs stage in 2016 performing “Lifestyles Of The Rich & Famous” with pop-punk legends Good Charlotte.

“I’m really stoked to do songs at the APMAs for all the pretty people,” Knight says of this year’s performance. “I’m gonna dress nice and everything, thank you.”

On performing at this year's APMAs, Zummo shares, “I played my first ever show with Sum 41 on the APMAs stage two years ago. To be returning for this special drum moment with my all-time drum bro Adrian Young is going to be amazing! Adrian and I have been collaborating together for over 10 years, and we're going all out for this performance. We also have a huge surprise special guest joining us that we couldn't be more excited about!” Young adds, “Looking forward to playing drums with my friend Frank Zummo! It will be a privilege to do what we do best at the APMAs!”

The all-star night also will feature one-time-only performances by All Time Low, Against Me!, Andrew McMahon In The Wilderness, Bone Thugs, Korn, Machine Gun Kelly, New Years Day, ONE OK ROCK, Pierce The Veil, The Pretty Reckless and Sleeping With Sirens. You do not want to miss your chance to witness your favorite artists on the grand main event stage. Many more artist appearances will be announced in the coming weeks, so be sure to keep an eye on the APMAs page.

In addition to the new performers, the first wave of presenters has been announced featuring GWAR, Starset, Sylar’s Jayden Panesso, Too Close To Touch and Trophy Eyes vocalist John Floreani.
Hosting this year’s event will be none other than Black Veil Brides frontman Andy Black, mastermind and star of the upcoming film American Satan. Biersack is nominated for Album Of The Year for his debut solo effort The Shadow Side and Song Of The Year for his dance floor anthem “We Don’t Have To Dance”).

Tickets are available now, but act fast; VIP packages and the low-priced $40 tickets are close to selling out.

There are less than 50 days left to cast your vote for your favorite artists, so be sure to make your voice heard here.