This week, Apple unveiled its most affordable iPad Air yet. The new product is almost perfect, but there is one major design flaw some may not realize.

As well, the company is launching an Apple One subscription that bundles together Apple Music, TV Plus, Arcade and more.

During Tuesday’s “Time Flies” event, Apple unveiled the latest iPad Air, a complete overhaul from previously released models. The new iPad Air has a striking resemblance to the 11-inch iPad Pro which is considered to be the more high-end model. It has the same design elements including flat sides, prominent edges and bezels. The new Air also has a 10.9 inch liquid retina display.

As well, the new iPad Air has the same 12-megapixel rear camera as the iPad Pro. Prices for the iPad Air start at $599 while the iPad Pro starts at $799 for the 11-inch model.

For those looking to purchase the cheaper iPad Air model, however, there’s a catch. The new tablet only has 64GB of base storage which is most likely insufficient for the average iPad user. The other iPad Air option is the 256GB tablet that retails for $749. If you are looking for an in-between in terms of storage, you’ll have to revert to the entry-level iPad Pro which has 128GB of storage.

Read more: It might be a while before Billie Eilish releases her next album

The new #iPadAir ad is amazing. Those colors are beautiful. What a satisfying #AppleEvent.

Along with the iPad Air launch, Apple has also announced Apple One. The new subscription plan bundles Apple Music, Apple TV Plus, Apple Arcade, Apple News Plus and iCloud storage.

Finally, the premier plan gives subscribers Apple Music, TV Plus, Arcade, 2TB of iCloud Store and News Plus. As well, this bundle includes the newly announced Apple Fitness Plus, all for $29.95 a month.

For those that don’t know, Fitness Plus features training for exercises including yoga, running, core, strength and cycling. By itself, the subscription is $9.99 a month.

According to Apple, the premier plan gives you the biggest bang for your buck with over $25 a month in saving. In comparison, the individual plan saves about $6 a month and the family plan saves $8 a month.

Apple One launches this fall and will be available in over 100 countries. 30-day free trials are available for those that don’t already have the apps. Customers who choose either the family or premier plans can add up to six members. 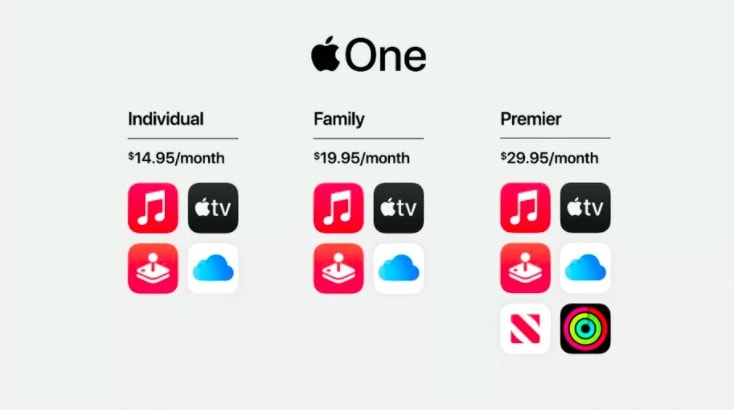 Naturally, the internet has a lot to say about the launch of the iPad Air and its storage options.

Man if this new #iPadAir had the 120Hz display I would be all over it. Also, come on @Apple… still starting at only 64GB storage. I want one but may stick with my iPad 7th Gen for now https://t.co/iH3gorMCIY

Apple has been really smart with the iPad Air but still can’t warp my head around the 32GB storage on the base model of the 8th generation iPad. I mean that’s literally useless #AppleEvent

@Apple needs to seriously knock off the 64gb base storage. They keep making more useful devices and computer alternatives like the new iPad Air. But then offers 64gb of storage. Apple brags about being more powerful then most laptops, but only has half the storage of a laptop.

I like the new ipad air, but only 64gb of base storage? Ugh.

What are your thoughts on Apple’s new iPad Air? Let us know in the comments below.