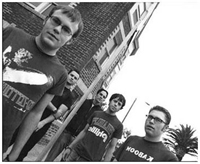 As frontman Matt Pryor had previously suggested they would, beloved emo legends The Get Up Kids will be embarking on a reunion tour this fall.

The routing sees the band crossing all over Europe and North America, with more dates yet to be announced. Here’s all the shows confirmed so far:

Aug 16 @ The Peel, Kingston Upon Thames